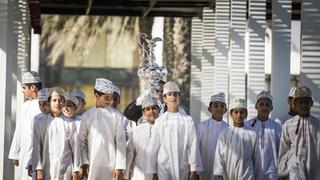 The America’s Cup organisers have added two new venues to the Louis Vuitton America’s Cup World Series calendar. Racing will take place in Oman in February and then in May the America’s Cup will return to New York for the first time in nearly a century.

The America’s Cup Event Authority has signed a deal with the Sultanate of Oman that will see America’s Cup racing in the Middle East for the first time.

“We are very proud and excited to welcome the America’s Cup community and its massive following to the Sultanate,” said Salim Al Mamari, director general of tourism promotion for the Omani Ministry of Tourism.

Oman has become a popular destination for winter sailing due to the consistent 10-15 knot breeze combined with a sunny climate and warm waters.

The New York event is scheduled to take place on the lower Hudson River in May 2016. With the Manhattan skyline providing the backdrop, the boats are expected to deliver a fantastic spectacle as they fly past the Statue of Liberty and Ellis Island.

The last time America’s Cup racing was held in New York it was in beautiful classic yachts; a stark contrast to the high tech speed machines of today. Between 1870 and 1920 13 America’s Cup matches took place off New York, all of them won by the New York Yacht Club.

“With six events around the world in 2016 our fans will have more opportunities to enjoy America’s Cup racing and follow their favorite teams and sailors as we build towards the finals in Bermuda in 2017,” said Harvey Schiller, the Commercial Commissioner of the America’s Cup.

“We’re excited to be able to add the new venues of Oman, New York and Chicago to the calendar, giving more fans a chance to experience the America’s Cup in person.”

The America’s Cup World Series is a warm up circuit for the 2017 America’s Cup in Bermuda in 2017. Five teams are hoping to gain qualifying points to earn the right to take on defenders Oracle Team USA in the 2017 finals.

Four events are now scheduled for 2016, with two further events expected in Europe and Asia later in the year.