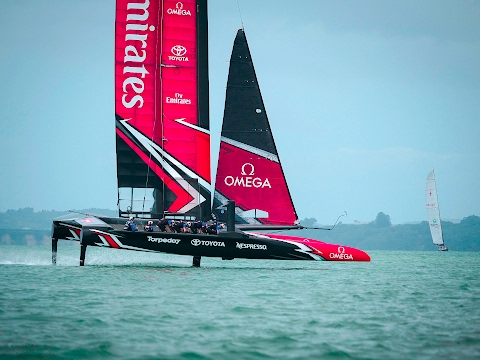 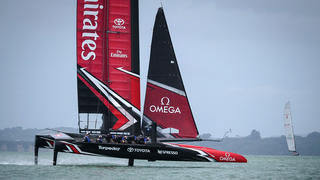 The design allows the team’s grinders to use their leg muscles to power the hydraulic systems on board this 15 metre foiling raceboat.

Dan Bernasconi, design coordinator at Emirates Team New Zealand, explained: “When we sat down to think about the overall design of this boat three years ago the benefits of cycling opposed to regular grinding were obvious, but certainly not without issues and difficulty with functionality, and this is what we have been working incredibly hard on overcoming.”

All of the boat’s components were built in New Zealand, working in collaboration with local partners Southern Spars, Cookson Boats and C Tech. Powered by a 25 metre tall rigid wingsail, the Emirates Team New Zealand raceboat has an estimated top speed of more than 46 knots.

Speaking after the first sea trails earlier this month, Sean Regan, shore team manager at Emirates Team New Zealand, said: “The fact we are the first team to go sailing on the raceboat, considering how late we were compared to the other teams is an unbelievable testament to the drive, focus and determination this very special team has collectively.”

Emirates Team New Zealand has a strong history of America’s Cup sailing innovation — the team pioneered the first foiling raceboat in 2011, but narrowly missed out at the 34th America’s Cup, losing 9-8 to Oracle Team USA.

Despite finishing the America’s Cup World Series in third place, and therefore missing out on the bonus points that are awarded to the top two, Emirates Team New Zealand is confident of claiming the main prize in Bermuda this summer, as Regan added: “There is a true belief that this team can take on the five other Goliaths and win this thing.”