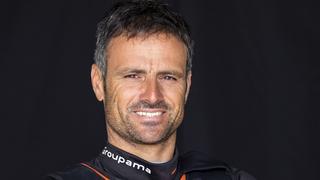 French America’s Cup skipper Franck Cammas was seriously injured yesterday afternoon (November 30) after falling from the foiling catamaran he was training on.

One of France’s most decorated sailors, Cammas was rescued by the safety boat and airlifted by helicopter to Nantes where he has successfully undergone surgery on a double fracture in his right leg.

According to a statement posted on Groupama Team France’s website, the 42-year-old sailor was run over by the rudder after falling overboard from the foiling catamaran in a wind of around 17 knots. The skipper is now expected to undergo a long rehabilitation process before hopefully returning to the water in 2016.

The team were training in the bay of Quiberon on two GC32’s. Although slightly smaller, the GC32 shares many similarities with the America’s Cup boats. With a measured top speed of 39.2 knots, the foiling catamaran provides a good training platform for the team to practice “flying” on the foils.

Thierry Martel, Franck Cammas' partner since 1998, expressed his relief that the sailor will not lose the use of his right foot.

"The coming months may sometimes be difficult for a sailor who sails almost 320 days a year," Martel said. "But we are confident that Franck will meet this challenge with his fighting spirit and he can count on our continued support."

Cammas is a multihull specialist who was brought in to lead the challenge of Groupama Team France in the run up to the 2017 America’s Cup. The sailing world now waits to find out whether his injuries will jeopardise his future participation.