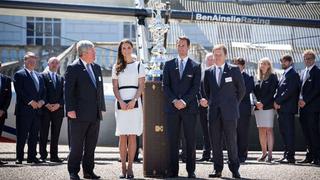 Sir Ben Ainslie today officially launched his own bid to compete in the 35th America’s Cup in 2017.

His team, Ben Ainslie Racing, is marketing itself as a British enterprise, designed to win the 163-year-old trophy for Great Britain. The first race took place off the Isle of Wight in 1851, but was won by the US yacht America. Infamously, no British team has won it since.

The beginning of Britain’s latest effort to win the Cup was a high-profile media event, at the Royal Museums in Greenwich, and attended by the Duchess of Cambridge, with the Cup itself also present.

Ben Ainslie Racing has a stated budget of £80 million with which to compete against billionaire Larry Ellison’s Cup-holding Oracle Team USA, and others. It is backed by a group of private investors headed by businessmen Sir Charles Dunstone and Sir Keith Mills, who claim 40 per cent of that budget has already been raised, with the battle for commercial sponsors about to begin.

‘This campaign is about righting a wrong,’ said Dunstone. ‘We (Britain) have an amazing maritime history. The Cup has to come home, we have to do that.’

Ainslie is perhaps the world’s best-known competitive sailor – and certainly the UK's – a multi gold-winning Olympian and the tactician famously drafted in to help the struggling Oracle Team USA win the most recent Cup on San Francisco Bay in 2013.

The launch follows hard on last week’s announcement of the boat Protocol for the next America's Cup – the foiling, wing-sailed multihill AC62 – and the sailing team of eight - six of them British and all apparently picked personally by Ainslie – were also in Greenwich.

‘This is the last great sporting prize never won by Great Britain,’ said Ainslie. ‘It has always been my ambition to mount a home challenge. The time is right and I am hugely encouraged by the support we are getting, not least by the Duchess of Cambridge.’