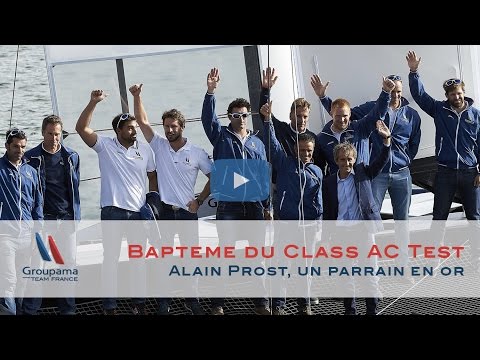 As the video below shows, the ceremony in Lorient on July 11 attracted a strong turnout from the local public:

The 13.45 metre prototype foiling yacht will be used for testing off the coast of Brittany from July to December in preparation for the main event in Bermuda in June 2017.

The team worked with a wide range of suppliers including Groupe Carboman who provided the hulls, pod and aft section of the wing.

Prost, a patron of Groupama Team France, said: “In France, we have incredible technology and we must find the right synergies. I don’t have any experience of foiling, but I’m longing to go sailing!”

With a 101 square metre wing surface and an upwind sail area of 137 metres, the new testing boat should carry the six-man Groupama Team France team to a top speed in excess of 40 knots.

Franck Cammas, skipper of Groupama Team France, explained that the test yacht is the result of 35,000 man-hours and three years of work.

“The America’s Cup is a tough nut to crack in the sense that we have to beat the world’s best crews, people who have a lot of talent,” he added. “We need to be rigorous, persevering and innovative.”

The America’s Cup World Series will head to Toulon in September, when Groupama Team France will hope to put their home advantage to good use and climb the leaderboard.