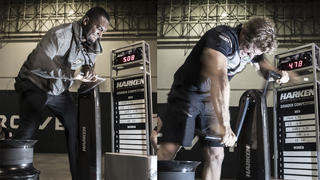 While the America’s Cup is an undeniably spectacular spectator sport few people get close enough to the boats to see the incredible hard work the sailors put in to win.

To demonstrate the skill and athleticism of its sailors Land Rover BAR challenged pro-basketball player Bobby Portis, who recently joined the Chicago Bulls, to a head-to-head ‘skills swap’ session.

Lead by Ben Williams, head of strength and conditioning at Land Rover BAR, Portis was given some idea of the endurance and fitness America’s Cup sailors need with a bespoke sailing workout aimed at improving mobility, power and stamina. Portis then went up against the professional sailors in a grinding challenge – impressively finishing second behind Land Rover BAR’s Freddie Carr.

It was then the turn of the Land Rover BAR sailors to step outside of their comfort zone with a game of Killer – a classic basketball game used to improve player’s free-throw skills. Unfortunately the team did not fare as well as Portis, who didn’t miss a shot all day, clearly demonstrating that their prowess is far greater on the water than on the court.

“These guys are endurance athletes and their demonstration today showed what it takes to sail these boats at such high speeds, highlighting just how fit they all are,” said Bobby Portis. “Joining them to train was great and you can see the pressure, energy and strength they have. They certainly put me through my paces during the training session - but I had them on the court!”

“Previously America’s Cup sailors were power and sprint athletes, and now this has changed thanks to the new challenges in today’s boat design, the sailing teams are required to train more like time trial cyclists,” explained Ben Williams.

“Training with the Chicago basketball players, who are extremely physically fit, demonstrates how powerful and agile the sailors are in order to drive these two-tonne flying boats above the water. The sport of sailing does compete and compare in endurance and strength with many other high profile sports across the world.”