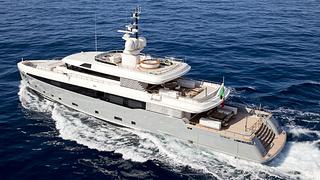 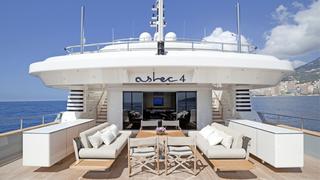 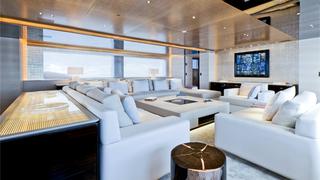 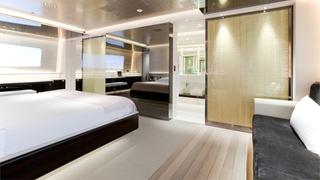 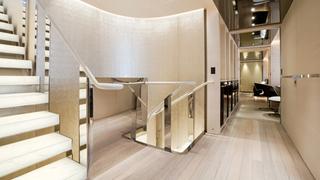 As its name suggests, this is the fourth incarnation of Aslec, whose name is derived from the initials of the owner, his wife and their three children. The previous were 19, 26 and 34 metres respectively, and all of them were conceived strictly as private yachts for family and friends.

For Aslec 4, designer Tommaso Spadolini adopted a virtually vertical stem, which is a good wave-cutter and adds nicely to the waterline length. The hydrodynamics reveal an almost flat, gentle deadrise from about midships aft, while a deep skeg adds to stability and protection for the propellers.

From the hull profile, there is little doubt that Aslec 4 is an ocean-going vessel. The lines for the three levels, topped by a deliberately funnel-shaped radar/comms mast, are purely businesslike but very attractive. At main deck level everything is full-beam, from the saloon to the owner’s suite to the garage for the crew and rescue boat. Not surprising, therefore, is the lack of starboard side-boarding access for guests, although there is an arrangement on the port side for crew and supplies.

Both the owner and his wife were very conscious of the elements that give life to their yacht, so exterior spaces are enormous for this size of vessel; particularly notable is the 70 square metre aft deck, which has only guard rails across the stern so that the sea is always visible.

‘The same applies to the main deck side windows, whose exceptional size gave us a few headaches when it came to meeting class regulations,’ says Bernado Papetti of Design Studio Spadolini. ‘But the effect is tremendously satisfying. The windows on both sides are covered by one-way tinted glass.’

It’s evident that the open deck spaces everywhere are more likely to be found on a 55 metre superyacht than a 45 metre, and this is down to the owner. Starting at main deck level, easy-rise stairways to the spacious aft bridge deck flank the saloon entrance. Broad side decks access the bridge and a forward area that is part Portuguese bridge, but more like a big cockpit with a sofa, a table and sunbeds. Three steps on each side lead down to an uncluttered foredeck with a sofa set into the forward superstructure. A neat safety feature in the foredeck bulwarks are panels that hinge outboard to allow crew close observation of the incoming chains and anchors.

Aslec 4's accommodation layout is pretty conventional, but the saloon is vast, thanks to the dining room being moved upstairs. The dining room itself has beautiful views, but to properly relax and appreciate the sea, try the loungers just outside on the big aft bridge deck. Forward and to port from the dining area is a large pantry with a dumbwaiter from the galley below and, further forward, the main bridge.

Below the main deck, forward of the engine room, family/guest accommodation has lots of natural light, is spacious and comfortable and comprises two VIP doubles with bedheads outboard, plus two twins (one with a Pullman berth) both facing fore and aft. All of the cabins are served by a central foyer. While outboard bedheads aren’t in theory a good idea, inboard ones would have seriously compromised wardrobe space.

Aslec 4’s interior is the work of Paris-based French designer Rémi Tessier. ‘It’s the first time I’ve worked with Rémi Tessier and the interior is totally different,’ says the owner. ‘All of the previous Aslecs had very classic interiors, with warm wood and extensive use of curtains and upholstery. Aslec 4 is very modern: the style is minimal but warm, with lots of contemporary materials.’

At main deck level, the saloon entrance width is governed by the outside stairways, but contains a bar to port, facing a neat little seating area with a table for drinks. The principal lounge space is light, bright, semi-enclosed and full-beam. Forward, the owner’s quarters are reached via a starboard foyer containing a guest dayhead and the owner’s office/study. There is a certain modesty to these quarters, accented by Tessier’s simplistic approach, but the comfort level is also obvious.

The owner and his wife were greatly influential in the overall design. ‘It is true that my wife and I have been greatly involved in all the decisions of this yacht,’ he says. ‘But with such talents as Tommaso and Rémi on our team, it was easy to make decisions or give fast final approvals.’

When asked about materials, Tessier explains, ‘I wanted plenty of natural light but always with a sense of warmth, so I used lots of brushed sycamore, bleached, polished or matt-finished. For contrast, I used high-gloss ebony and most of the floors are made in panels of smooth, handmade woven leather. The pale pearl gold leaf surrounding the windows brings in the sunlight. From the initial sketches to the finished product, Aslec 4 took about two years.’

If any part of a yacht is glossed over it’s usually that allocated to the crew. In advance of proposed regulations that might in future give the crew more space than the guests, Aslec 4’s quarters are a delight. The crew has been with the owner for some time and, in consideration of their comfort, he has established spaces with the unusual feature of at least two cabins being doubles.

‘I’m in the shipping business and company philosophy is always to give great importance to our crew’s work environment, so I couldn’t do something different on my yacht. We must also remember that on these big yachts crew will often spend a considerable amount of time at sea and work can be long and stressful. It is important to me my crew know that when they finish work there are nice cabins for their rest and privacy.’

Aslec 4 is a fine, practical but good-looking yacht, full of sound design and innumerable personal touches. But what features give the owner particular pleasure?

‘It’s too early to comment on particular pleasures on such a yacht,’ he says. ‘The slow navigation in near silence is a new “grand” experience; all my previous yachts were fast, but noisy. But I am still learning how to use her.’