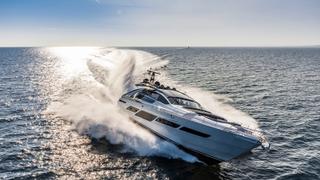 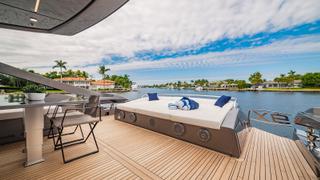 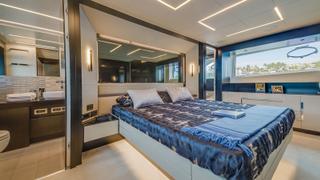 “She’s a beast,” says the captain with a smile, as the Pershing 9X leans into a 360 at close to 40 knots. If by beast he means a force that can reckon with the open ocean at ridiculous speeds, I would have to agree. However, the interior, where we are being cocooned in enviable elegance, is anything but beast-like.

The second model in Pershing’s new X series, the 28.1 metre 9X premiered at the Cannes Yachting Show in September 2017, but only made her first public appearance in the US 14 months later at the Fort Lauderdale International Boat Show. I was invited on board this American debut (hull No. 6, built on spec) on an unusually chilly day in Palm Beach with temperatures an un-Florida-like 15˚C and an even brisker north breeze threatening our enjoyment. Yet despite the wide open aft doors, the saloon was supremely comfortable; the silky soft carpet cradled my bare feet and yes, my hosts confirm, the heat was on – a first for me in South Florida.

“This is a re-invented 92,” says Randy Coleman, vice president of sales for Ferretti Group America, listing the new generation’s plus points: more spacious cockpit, improved foredeck seating, a new style of hull windows and the latest technology. It’s also built with a lot more carbon fibre. The benefits of the strong, lightweight material are well known; what’s less known is the trade-off – carbon fibre transmits sound. Yet the 9X is “super engineered”, you could say, for a quiet ride.

Helping the silence is the choice of power plants, a pair of almost-inaudible MTU 16V 2000 M96Ls. “A lot of the time, the captain will be pulling away from the dock with these motors in different models, and I’m saying, ‘are you going to start the engines or are we going to drift out of here?’” Coleman says. He’s absolutely right. As we make our way up the Intracoastal Waterway all I can hear is the gentle splash of our wake.

Leaving the shelter of the Palm Beach Inlet, Captain Damon Lish opens her up and we seem to skim over the seas, throwing a rooster tail as high as the top deck, courtesy of the Top System surface drives. It is mesmerizing to watch from the comfort of the cockpit, which is indeed spacious, as Coleman claimed. To create more room here, the flybridge is supported by “wings” over the side decks instead of structure aft that would infringe on the space. The seating here and elsewhere outside feels and looks like a sumptuous leather, but it’s actually an award-winning, vinyl by Spradling called Hitch.

Pershing is not one to exaggerate its swiftness; there’s no need. The 9X’s official max is 42 knots, and we reach that speed over ground with little effort, while the boat speed monitor reads 46 knots. As Lish makes circles in the open Atlantic, I watch him continually flick the trim controls. “She’s amazingly responsive for 92 feet, and around 180,000 pounds,” he says. “She’s just fun to drive, which is unusual when you get to this size.”

He’s driving the hard way though; press the “Easy Set” button and the auto-trim system does the work for you. Making it even easier is the new Xenta joystick. “This is one of the few surface drive boats that we can run with a joystick,” Coleman says. “From a manoeuvring standpoint, it’s like driving a conventional shaft driven boat around the dock.” The captain appreciates the new feature that lets him run the boat up to cruise speed with the joystick controlling both throttles and steering. “It’s very easy to pick it up and use,” Lish says.

Like all Pershings of late, Poltrona Frau designed the bridge to look as good as the yacht performs. Within the helm’s supple leather are three 24-inch Naviop touchscreens; two more 17-inch screens are up top. Each one has its own processor, allowing the user to customize each and offering plenty of redundancy. I wait until we’re back on the Intracoastal at a more sedate speed before venturing up to the flybridge. The helm overlooks an impressive foredeck lounge, one of the big changes in the model. In addition to dining/cocktail areas, both the top deck and foredeck have massive reclining sunpads that can be covered by canopies.

Whether you take advantage of the sunpads or take the wheel, the 9X is pure respite. Pershing calls the series Generation X. It’s an apt name, as that’s who the boat will likely appeal to – forty to early fifty-something-year-olds who need a breather from their hectic lives. Board the yacht at noon at Chelsea Piers and you can be having a drink in Sag Harbor at 3pm. Miami to Nassau? A quick four hours. That’s the beauty of a Pershing, and for busy owners, what better gift is there than time?