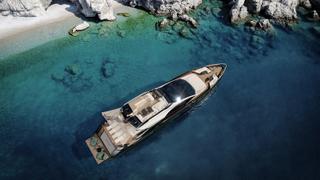 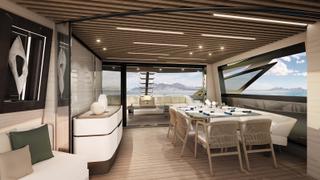 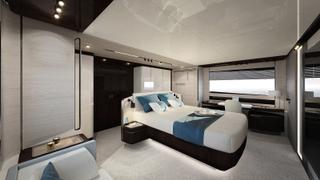 The new flagship of the S Collection, the Azimut Grande S10, takes an architectural approach to an unconventional design, discovers Caroline White

“Unexpected and a little bit disruptive.” Meet Azimut Yachts’ game-changing S10, as characterised by brand manager Federico Lantero – with renderings exclusively revealed here. The boat is the flagship of the Italian builder’s existing S Collection, but while it maintains the line’s sporty looks and naval architecture, in terms of lifestyle this 28.7 metre shoots off-piste.

Inspired by sources as disparate as the cascading decks of Malibu beach houses, the central cockpits of sailing superyachts and modern sports cars, she represents designers (Alberto Mancini – exterior and main deck concept; Francesco Guida – interior) and a yard willing to draw on outside influences to meet the demands of 21st-century superyacht owners. It’s something genuinely different in the sub-30-metre market.

“We wanted to give an answer to those who were searching for a more informal and pleasurable way to live in contact with the sea,” says Lantero. “It is for those who really want to enjoy the yachting lifestyle to the fullest. That’s the point.” That means optimising every area to that task. But in terms of how to get there, says Mancini: “They gave me a blank sheet of paper – that was a dream. I thought my idea was maybe too mad and they were going to kick me out, but they said, ‘Let’s try it!’”

This is most evident in the reinterpreted layout, which Mancini describes as benefiting from an “architectural approach”. That includes creating perspectives with which you wouldn’t normally credit a sports boat. For example, on the flybridge deck of a more standard design, the staircase would be tucked away in a corner, but here it is positioned centrally – “a piece of art with carbon details”, says Lantero – leading down to the aft deck, from which another pair of stairs leads down again. A platform in the flush garage hatch folds down to create a space expansive enough to constitute another deck, on the water.

“The idea was to mimic a Malibu villa with different decks going down to the sea,” Mancini explains. The garage here is impressively large, to accommodate a tender, jet ski and two Seabobs – towards that aim of making the most of life on the water.

Back up on the main deck things get even less conventional. There’s one cockpit in the traditional position, aft, while a second cockpit – inspired by classic sailing yachts – lies forward, down a few steps. It’s the perfect private nook for when moored stern-to. Wings fold out from the bulwarks either side: “They will play a double role because they will open side gates for mooring dockside, or to jump from the boat into the sea, and they work as poles for an aft bimini, which covers the huge terrace,” says Lantero. Forward inside lies a cosy dining room, followed by a saloon with a glass roof and opening windows. The effect makes the entire space feel open, airy and in tune with the seascape.

There’s plenty of less obvious innovation too. “We wanted to provide, even on a sport yacht, full privacy for the crew,” says Lantero. The arrangement of their quarters and stairs means that crew and guest areas can be totally sequestered, while still allowing the crew to move around the boat. “The classic flow is completely separated”, says Lantero.

The exterior design has an automotive air, with detailing that plays with concave and convex surfaces, its lines strengthened with carefully planned LED lighting. Inside, Guida has enhanced the unusual design. He describes the dining area that straddles the saloon and cockpits as an “al fresco patio” and he’s tried to keep inside-outside flow generally.

“Part of the interior has the same teak floors and ceiling as was used in the cockpit outside – some of the furnishings are the same, too.” Decor options for owners include a more classic look with beige, light oak and neutral tones; and a sporty, modern one with grey oak and dark stainless finishes. Whichever future owners choose, they can meet the first hull of this unusual design at the Cannes Yachting Festival in September.