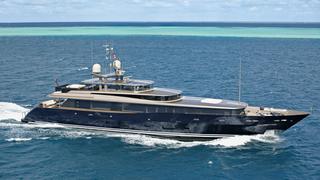 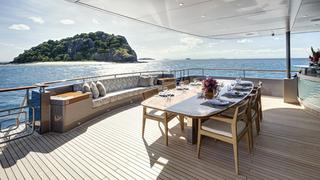 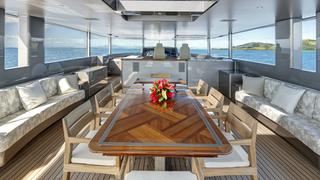 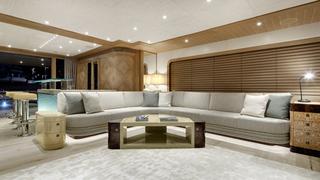 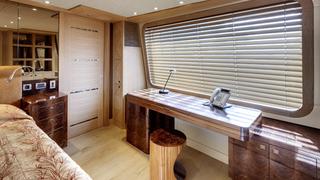 In the international community of yacht owners, it is not unusual for women to be active partners, closely involved in projects from conception through construction to enjoyment. But the number of women who, on their own, take on commissioning a new yacht makes up a small and very exclusive group.

The owner of the new 154-foot Ed Dubois-designed Loretta Anne, a Canadian businesswoman, not only signed off on the order with New Zealand’s Alloy Yachts, she also parlayed a three-way deal with the yard, which involved trading in her existing Dubois motor yacht, the 126-foot SQN, and buying a new interim boat, the 131-foot Allogante, to keep her afloat while her new project was under construction.

‘My love of boats probably comes from spending a lot of time in The Bahamas and Bermuda when I was young,’she says. ‘Water, boats, sailing, swimming, snorkeling, scuba diving — anything to do with the water.’

This owner is no stranger to large yachts. Together with her husband, she owned four motor yachts of various sizes, culminating with SQN, which they bought in 2005 after enjoying a Mediterranean charter on board.

Their long-time captain, Philip Shirley, recalls that the husband, who was well known for his incredible work ethic, spent much of his time on board working, only stopping for occasional swims. Boating was principally the wife’s passion. ‘She was the driving force behind the boat projects and organized most of their boating trips,’ notes Shirley, who was the owner’s representative throughout the Loretta Anne build.

After the death of her husband in 2008, she began to contemplate a new boat project. Alloy Yachts built SQN in 2003 to a design by Dubois Naval Architects with a Donald Starkey interior, a combination she liked.

Given that history, she returned to Alloy Yachts when she started considering a new boat. By coincidence, Allogante, Alloy’s venture into marketing a spec boat, was available with the same Dubois-Starkey naval architecture/interior design pedigree. However, like SQN, Allogante had been completed to somebody else’s brief. Ultimately, she wanted to do her own project. It just happened that Alloy’s chairman, Gary Lane, had design drawings from Dubois Naval Architects for a larger boat. He had proposed to build this design for himself, but he was prepared to relinquish it to a new owner. Here was an opportunity to draw on a virtually blank canvas, and the three-way SQN-Allogante-Loretta Anne _deal was struck. ‘Allogante_ was bought as an interim boat. This final one was the one that I could get just the way I wanted it. That was the thinking,’ she says.

One key element was a shallow draft, as the owner still spends much of her time in The Bahamas. Consequently, the two-and-a-half deck, raised-pilothouse arrangement Dubois has used before on smaller motor yachts such as SQN, Ad Lib, Como and Allogante was retained for Loretta Anne, keeping the centre of gravity low and the draft to just over seven feet.

At 23 feet longer than Allogante, the new Loretta Anne is clearly a much larger volume boat, but the additional space is not just for the guests’ indulgence. ‘The boat is bigger in all respects, so the three guest suites and master are inevitably more spacious,’ says the owner, who resisted the temptation to add more suites, as she prefers entertaining smaller parties.

The real beneficiaries of the greater volume have been the crew, who not only have slightly larger cabins than the norm, but also have their own galley alongside the usual crew mess. The gym, while obviously available to guests, is primarily for the crew’s benefit. It has an en suite bathroom and Pullman berths so can be pressed into service as extra accommodations, if required.

The main deck salon and dining area is extremely spacious, and large side windows provide sumptuous views, while the transition out onto the aft deck adds to the sense of space. The curved glass bar and alfresco dining table will make the aft deck a popular gathering place, with a sliding roof providing shelter from the sun or the evening chill.

Forward of the salon and interior dining space on the port side is the chef’s restaurant-style kitchen and an intermediate serving station. A companionway on the starboard side leads forward to a lobby with an S-shaped staircase leading down to the guest accommodations. The companionway continues beyond the lobby to the owner’s suite, which comprises a spacious stateroom with a separate study and a large his-and-hers en suite.

On the lower deck, guests are accommodated in two mirror-image VIP suites and a twin stateroom with a Pullman berth—ideal for grandchildren as it comes complete with a bathtub in the en suite. The crew area, forward of the guest space, has separate access to the main deck.

Occupying the half deck between the main deck and flybridge is the wheelhouse with state-of-the-art navigation and communication electronics. A long, raised settee on the aft wall allows guests to view the action. Here the vertical windows reveal a practical benefit, providing outstanding forward visibility, while avoiding the glare and heat often associated with raked screens.

The flybridge offers elevated viewing and lounging options with a dining table, barbecue, bar, Jacuzzi and sunbathing platform. The flybridge’s forward section is enclosed in clear glass with side windows that slide down to allow the breeze to flow through, while nine large, clear-glass skylight panels set into the bimini roof add to the sense of connection with the wide outdoors.

The third part of the equation, which was important to the owner, was the interior design. Donald Starkey’s approach draws from a broad palette of materials and textures to create complex patterns and finishes. The timber joinery, for example, is heavily inlaid, not just with contrasting timbers and designs, but also with mother-of-pearl detailing. In the bathrooms, heavily striated marble of different patterns and hues adorn the walls, floors and counters.

The yacht has judiciously apportioned space and attention to details important to the way the owner and her friends and family intend to use the boat. It is a vessel for the tropical waters of The Bahamas with shallow draft and zero-speed stabilisers, and it’s made for lots of contact with the sea—swimming, snorkeling, scuba diving — thanks to a custom aft boarding stairway that angles gently down into the water.

The owner has no desire to hurry across the ocean at 25 knots, so the engine room is not bursting with horsepower that will seldom be used. Powered by twin Caterpillar C32s rated at 1,600 horsepower each, Loretta Anne will cruise very efficiently at about 14 knots with a maximum speed of about 17 knots.

The owner plans to spend her first season of ownership in the wide Pacific Ocean before venturing farther afield. This energetic and creative woman has a busy schedule of places to go, things to see. In the exclusive club of women who have authored their own yachts, she is to be commended for the vessel she and her team have created for the purpose.

Featured in the October 2012 issue of ShowBoats International magazine