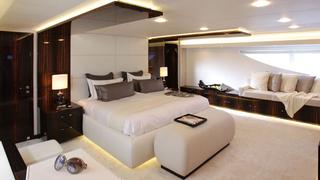 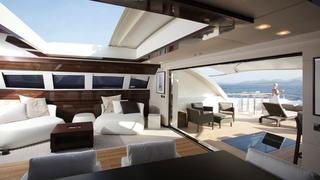 A look inside 41 metre superyacht taTii

The bows of taTii, the second Tamsen Maritim yacht built in an epoxy sandwich reinforced with E-glass and carbon, stretch up high above the main deck, throwing off spray even in rough seas. The beam of 8.6 metres has created a voluminous hull with an unusual amount of space below decks.

Her technical refinements include an exemplary engine room with carbon walkways and clearly labelled pipework. The ship’s engineer communicates with the bridge by ship’s telephone or VHF from a soundproofed, air-conditioned command centre.

The bridge, designed by Alewijnse Marine Systems, is laid out with impressive clarity. All the instruments, monitors and displays are set flush into the leather-clad instrument panel. From the helm there is a perfect view forward and to the sides through the steeply sloping front windscreen. The stern view is transmitted to a monitor by an aft-facing camera.

When a crew member takes the helm for longer voyages or night passages, the captain can quickly intervene if necessary: his cabin is situated on the bridge deck to port. A separate crew companionway connects the bridge with the central galley on the main deck and the crew mess and cabins on the lower deck.

The inflatable dinghy, jet-ski and tender, housed in the stern garage, are moved about or lowered on to the roller slipway by crane. The GRP tender with its console helm stand and banquette seats is a custom design.

taTii also boasts an elaborate Puresonic sound system. Loudspeakers for the televisions, radios and music systems are concealed behind wall and deck panels, with resonances and frequencies tuned so that the sound penetrates the panels with no loss of quality.

The interior, designed by Heiner’s wife, fabric designer Julia Tamsen, is characterised by zebrano and ebony woods offset by swathes of white on the leather-clad walls, sofas, armchairs and ball chairs in the saloon. On the floors, pale carpets from Oliver Treutlein are broken up by dark wengé or pale birch boards.

For the walls, as well as the lounger and bar in the saloon, Julia chose white leather with backstitched seams from Italian company Foglizzo, while for the instrument console on the bridge and the treads of the stairway down to the guest area dark brown leather was used. Leather is also used in the door handles, which come from British company Turnstyle Designs, and in the blinds, made by Nature Deko in Brandenburg, Germany.

Providing a focal point amid the lines and angles are the Ball Chairs – a 1966 design by Finnish designer Eero Aarnio. Other stand-alone pieces are by Patricia Urquoila for B+B Italia, while deck furniture comes from Belgian company Tribù. Luxurious fabrics were supplied by the Italian house of Loro Piana.

The vast expanse of the main deck interior is broken only by a partial room divider. Balconies open out of the bulwarks to port and starboard giving guests clear views. The external living space is equally vast, with a spa pool and seating area on the bow and generously proportioned sunbeds on the two aft decks.

The sliding glass doors on the main and upper decks open right back across the full beam of the yacht, while a sliding glass roof of about eight square metres lets light and air into the upper saloon. Up here there is also a dining area with seating for eight.

The owner’s suite is situated forward on the main deck, with a bedroom that extends across the full beam of the yacht plus an office and a huge en suite bathroom. The four near-identical guest cabins are found midships on the deck below, positioned around a central guest lobby. For the crew there are three cabins with stacked berths in the bow, and a mess that seats eight.

_taTii _is currently listed for sale by bluewater.