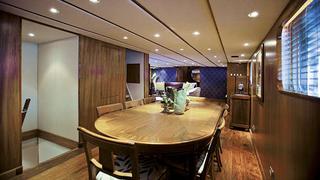 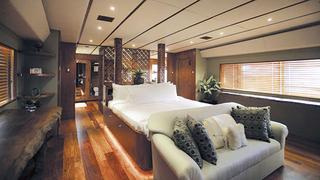 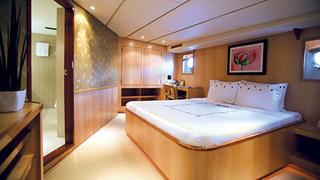 The bulk of the crew accommodation is forward and one deck down, below the well deck tender garage, where cabins radiate from a central mess area. In the after part of this deck lies the mechanical space, where the original low-revving Hanshin engine takes pride of place. Part of the refit work included giving the engine a full overhaul, along with upgrading much of the piping and other engine room systems.

Among these upgrades was the addition of an eco-friendly, smokeless wet exhaust. The control room off to the port side of the engine room is a curious mix of old and new, where modern monitoring equipment sits alongside some of the original switchgear and dials from the yacht’s days as Taishu Maru.

The engine is a remarkable contrast to today’s efforts: it pumps out 1,300hp at just 320rpm, and when under way it is so quiet that you can stand next to it and hold a normal conversation. In addition to the other engine room upgrades, three new generators were installed as part of the refit, along with new air-conditioning systems, a five-bladed propeller, a Headhunter freshwater system, and a new bowthruster drive system.

On the main deck, the forward saloon area of Galapagos, which led through to two double cabins, has been re-configured as one giant master suite. An island bed sits among the warm browns of exotic woods, while an extended wooden bed head separates the sleeping area from an open plan en suite.

Aft of this, the main saloon has been refreshed to provide a comfortable, colonial club feel, while the AV systems have had a thorough upgrade – a perfect spot to watch a movie. A dining table aft on the starboard side provides a pleasant mix of formality and relaxation by retaining contact with the seating area.

Above, the bridge deck has also had an extensive makeover. The bridge itself has been fully re-configured with brand new navigation and comms equipment, while behind it what was a chart room and gym on Galapagos has been transformed into an impressive captain’s office, leading through to a double captain’s cabin.

The deck spaces also received considerable attention. Aside from the sundeck extension and the addition of the DNV-standard, three-tonne helipad (Ark Angel also carries aviation fuel with refuelling facilities), the sundeck now features a saltwater spa pool and observation area. One deck below, a large dining table aft offers alfresco dining for 12, while aft on the main deck is a bar and an inviting seating area with loose, rattan-style sofas and chairs.

It is interesting to note that at certain points in the superstructure the original side deck doors look as if they are slightly skewed on the vertical. This hints at how the trim of the vessel changed during her three conversions, and while the effect seems odd on paper, it does act as a focal point, a curiosity that adds charm and character to this fascinating yacht.

The fact that everything, from the superstructure changes to the interior cabinetry and the paint job, was done at HYS Yachts is testament to the ability Prangnell and Jupe’s yard team has developed.

Throughout, the standard of finish is excellent, and with a range of some 12,500 miles (and, too, completed at a fraction of the cost of building a new 55m yacht) it is clear to see why conversions such as this are proving more and more popular for serious yacht owners. Converts to the cause, you could say…