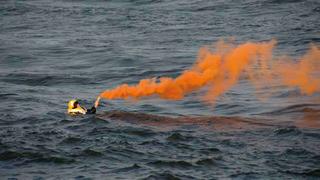 Cost of safety equipment on yachts

No yacht owner likes to be told to spend £12,000 on inflatable boats and a further £500 per year maintaining them only to learn that in 10 years’ time, without ever having been used, the rafts are to be thrown away, yet this is the harsh reality of carrying life rafts aboard the average, well-run 50m yacht.

Carrying the correct safety equipment aboard a yacht, to minimise the chance of a disaster at sea, is never going to be cheap. It is easy to cut corners and buy only the barest minimum. Sadly, when the unimaginable catastrophe happens, it will be too late to go back and purchase that safety item previously rejected as an unnecessary expense.

Luckily, many safety items are mandatory by law. When a disaster happens, it is too late to discover that the value of having a safe yacht has been ignored and that the fire extinguisher is inadequate, the auto release on the life raft is faulty, the EPIRB is registered in the name of another yacht or there is no defibrillator.

The move to safety at sea

The costs of safety at sea can be traced back to 1948 when the United Nations created a specialised agency to deal with shipping: the Inter-Governmental Maritime Consultative Organisation, later renamed the International Maritime Organisation (IMO).

Since then, there has been a permanent international body capable of adopting legislation on all matters related to maritime safety, prevention of pollution, and liability and compensation following accidents.

Out of disaster often comes some good and so it is in the maritime world. The impact of the Titanic’s loss shortly before midnight on 15 April 1912 had a huge impact, greater than any previous maritime disaster.

This was partly because more than 1,500 people died and partly because so many of them were rich and famous. Many said the ship owners had cut back on the number of lifeboats as a cost-cutting exercise and there was an outcry on both sides of the Atlantic, with questions raised about the wisdom of allowing individual countries to set safety standards, with the inherent risk that commercial considerations would take precedence.

As a direct result of this disaster, the first International Convention for Safety of Life at Sea (SOLAS) was convened in London in November 1913. For probably the first time in the maritime world, the protection of life was stated as a priority over property. The first SOLAS convention came into force in 1915.

The same ships are probably also responsible for saving the lives of unknown numbers of people and preventing environmental damage, because the disasters that befell them caused new regulations to be brought into force worldwide via new SOLAS conventions.