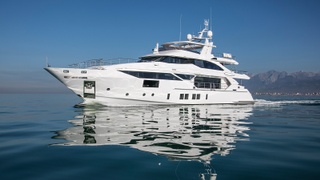 Benetti announces launch and delivery of Fast 140 and Fast 125

The interior is decorated according to RWD’s “land” theme. The studio also offers “air” and “water” themes. The yacht accommodates a total of 12 guests in six cabins, including a full beam owner’s suite on the main deck.

Other features include a spacious, al fresco relaxation area on the upper deck, which leads via sliding doors into a saloon equipped with a living area and American bar.

The captain’s cabin sits adjacent to the wheelhouse area overlooking the yacht’s swimming pool while the remaining four guest cabins are grouped together on the lower deck.

Meanwhile, the seventh hull in its Fast 125 series, known as BF107, was delivered at the Viareggio-based yard on April 24. Like the Fast 140 series, the Fast 125 also features exterior design by Righini and interior styling by RWD.

The owner of BF107 has opted for RWD’s “air” theme design, which includes materials such as bleached eucalyptus and dark tay wood. The exterior design meanwhile is characterised by an in-house designed wave-piercing hull and 2.1 metre high decks.

Accommodation on board is for a total of 10 guests, including a master suite for the two owners, two doubles and two twins. The crew quarters meanwhile allows for a staff of seven.

The Fast 140 features an AZP C65 propulsion system developed in collaboration with Rolls Royce, while two 2,600 MTU engines provide a top speed of 22 knots and range of 1,750 nautical miles at 12 knots.