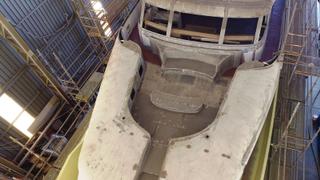 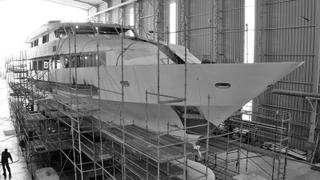 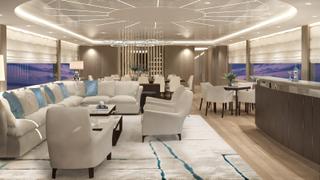 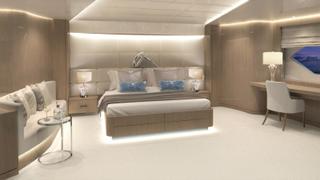 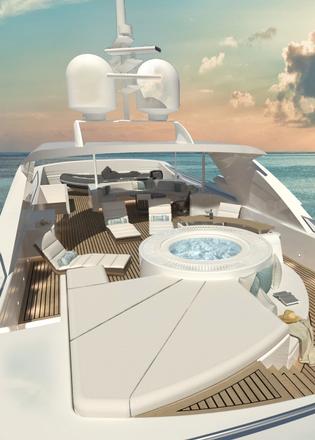 A construction update on the 40.3 metre Codecasa motor yacht Xana has been released seven months after she began her 26-month refit in Greece.

Navinco Naval Architects has now assumed control of the project with naval architect George Tsokris in charge. Tsokris was also responsible for 46 metre FeadshipAncallia project which went on to win the best rebuilt yacht accolade in the 2015 Boat International Superyacht awards.

A newly released drone image of Xana shows that the newly formed seating area forward of the bridge has taken shape. The new design now features a fixed settee adjacent to the bridge windows.

Meanwhile a lower armless settee will be positioned further forward with a coffee table in between. The new arrangement of the bridge windows can also be seen in the image. The section will feature removable shading cast by an awning, which will be attached to two removable support poles forward. Its rear end meanwhile will attach to the bridge superstructure above the bridge windows.

First launched in 1994, the tri-deck motor yacht was sold back in June 2017. The owner was keen to revive a pedigree yacht from a bygone era and give her a new lease of life with a view to the charter market as well as private use.

Due for relaunch in summer 2019 and ready for charter by late 2019, her key upgrades will feature a five metre aft extension, blue hull finish, new Naiad stabilisers, aft tender garage and a fresh interior from AMK Architecture & Design.

Working to RINA and LY3 standards under the project management of captain Tasos Keramidas, Xana, which means ‘again’ in Greek.

On the technical side, the original MTU engines will be given a complete zero-hours overhaul. Meanwhile, the naval architecture is being modified, with the aim of improving the fuel efficiency and speed — her current range is 3,300 nautical miles at 12 knots and she cruises at 15 knots.

The deck spaces will also benefit from the refit, with the extra five metres being used to extend the sundeck and upper deck — all the better for enjoying the Mediterranean lifestyle.

The transom design has been revised to increase the size of the swimming platform and improve access, with two spiral staircases instead of the existing central one as well as a new passarelle.

Moving inside and the saloon will benefit from greater levels of natural light, as the windows will be reshaped from curved to rectangular and the gunwhales will be lowered on both sides.

Take a closer look at the yacht's new interior decor

The crew will also benefit as the galley will be moved from the lower deck to the main deck, giving much easier service at meal times, and a new captain’s cabin is being created on the bridge deck, increasing the capacity to nine crewmembers. Otherwise, the yacht’s capacity will remain the same, with room for up to 12 guests split across six cabins.