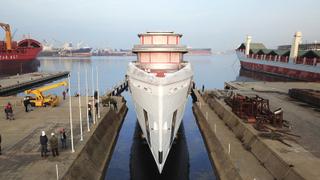 Perini Navi has given a construction update on the first hull in its Voyager line, revealing the engines have now been installed on board the new-build 56 metre motor yacht.

It comes after the yacht completed the first phase of construction at the yard's Turkish facility and was transferred to the yard's La Spezia facility in Italy.

Construction remains on track for a slated 2020 completion.

Designed in partnership with naval architect Philippe Briand, the new Voyager 56 metre has been built from a steel displacement hull and aluminium superstructure.

The tri-deck design features a six-cabin layout, split between the main and lower decks, with the forward-facing owner's suite on the upper deck. The crew quarters can accommodate up to nine crew members.

Lamberto Tacoli, chairman and chief executive of Perini Navi, previously said: "Seeing a new yacht take shape like this is always very exciting. The lines of the 56 metre Voyager are the result of an ongoing commitment to preserve the unmistakable Perini Navi style, whic obtaining a modern, efficient and more generously sized yacht."

“The market is beginning to grow again and Perini Navi is and wants to continue to be among the key players worldwide," he added.

The yard added that the new yacht will follow in the wake of the 49.5 metre Exuma, 55.2 metre Galileo G and the 73 metre Grace E — all of which were designed by Philippe Briand Naval Architects.