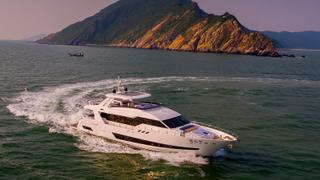 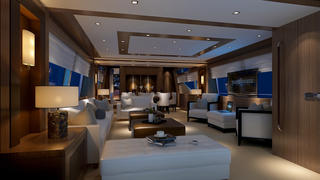 Chinese yard Heysea has delivered the first hull in its new Asteria 96 series. This 29.26 metre yacht was built from a GRP hull and superstructure.

Developed in collaboration with Australian naval architects David Bentley Yacht Design, the first Asteria 96 was built for a Chinese client and hit the water for the first time in February 2017.

Accommodation is for six guests, split between a master suite and two convertible double staterooms, which can be set up as doubles or twins. Meanwhile the crew quarters allows for a staff of up to three people.

Other key features include a walk-in wardrobe in the owner’s cabin and a separate media room that has been fitted out with a state-of-the-art entertainment system, while subtle accent lighting adds to the relaxed ambience on board.

The interior décor was designed in-house with an elegant main saloon leading into the formal dining area. Exterior relaxation options are abundant with a superyacht sundeck, aft cockpit and foredeck seating area.

Power comes from a pair of 1,136hp Caterpillar C18 diesel engines for a top speed of 20 knots and a comfortable fast cruising speed of 16 knots. With a total fuel capacity of 5,000 litres, the Asteria 96 should be suitable for extended coastal cruises.

Heysea adds that future models can be built with a more powerful engine set-up, resulting in top speeds of up to 28 knots. Other optional extras include a larger crew quarters with room for five.

Other projects currently under development at the Chinese yard include the 35.1 metre Heysea 115, which is due to hit the water next year, and a 43 metre Heysea catamaran slated for launch in 2017.