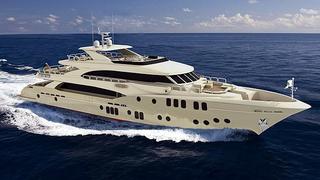 UAE superyacht builder Gulf Craft has shared more details of its new build underway the Majesty 155, its largest yet, during a press event at the Monaco Yacht Show.

The 47m motor yacht is semi-custom, but more than being able to alter the interior, Gulf Craft's COO Erwin Bamps explains that the 155, 'actually can have different superstructures for every boat ,' he says. 'We are moulding hull No. 1 now, but can still change the superstructure and interior. It's not sold yet, so a lot of options are open.'

The 155 will be powered by twin engines at 1,930hp and achieve top speeds of 16 knots with a 4,200nm range. The yacht is scheduled to launch end of first quarter 2015 and be ready to show that summer.

Gulf Craft is showing its Majesty 105 at the Monaco Yacht Show. ' shows how far we can go with our customisation,' Bamps says. 'We don't want to improve with just every new model but with every new hull that's launched.'

Bamps said that Gulf Craft is growing and the builder is looking to expand with a fifth yard – currently the Gulf Craft has four in UAE and one in the Maldives. 'We said once we wouldn't go over 50-metres, but we have already surpassed that, so not sure where we could go and what we'd build in the fifth yard.' Maybe even larger yachts to be announced yet from Gulf Craft in the future, but for now, stay tuned for more information and interior images on the Majesty 155.