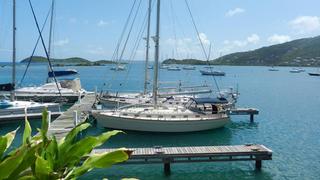 A man has been found guilty of the burglary of a tourist's yacht in the British Virgin Islands.

Following a trial, Jamal Freeman was found guilty yesterday (November 26) of the burglary of the yacht Be As You Are 2 at Penn's Landing Marina on Tortola on February 7 2014.

The 21-year-old was initially charged with aggravated burglary, as he was alleged to have used a firearm during the incident, but the charge was subsequently amended to burglary.

Grifth Williams’ was holidaying with his yacht in the British Virgin Islands when the burglary happened. He awoke to find two masked men on board his boat attempting to enter his cabin. The two assailants then fled the yacht on a dingy.

Clients of the Penn Landing Marina raised a $10,000 reward to try and find more information about the assailants after the burglary and Freeman was arrested on August 1 2014.

The prosecution used evidence of baseball cap, which was found on the yacht with Freeman’s DNA on it, to place him at the scene. A nine-member jury returned a unanimous verdict for the charge of burglary and Freeman will be sentenced on December 14.

Mr Williams told press in 2014 that he had been saddened by the event.

“I’ve been a visitor to the BVI for 18 years now and one of the attractions here has been always this sense of a safe and warm environment,” he said. “This particular incident is very disturbing and actually makes my wife and I very sad.”

If you want to find out more about how to make your yacht more secure read out guide to fitting out a superyacht for maximum security.