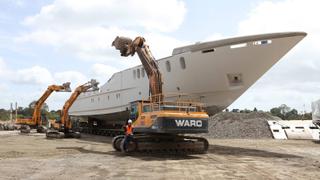 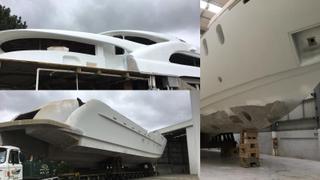 The 49.5 metre Sensation Yachts Hull SY32 is being offered for sale by a New Zealand salvage firm as the yard is dismantled.

Construction began more than nine years ago working to DNV standards, but the project stalled after Sensation Yachts ran into financial difficulties. If a buyer is not found in the next two months, the composite hull will be scrapped.

Ward Demolition Limited has pored over the remains of the defunct yard and believes that the completed hull and part-finished superstructure could be salvaged if the right buyer is found.

Peter Ward, managing director of Ward Demolition, told Stuff.co.nz: “The [previous] owners have already spent millions on it, and we have been told that its up to code to the point that it has been built."

This tri-deck motor yacht’s specification includes a 9.2 metre beam, 1.98 metre draught and a total displacement of 280 tonnes, while the hull could be fitted with twin 2,250hp Caterpillar 3512B diesel engines and a 72,000 litres of fuel tankage.

What’s more, the interior could accommodate up to 12 guests in five cabins, and there is room for eight crewmembers should the project be completed at a surrogate yard.

Sensation Yachts ceased trading in 2009, but legal disputes over the West Auckland premises prevented the chattels from being sold off until now. Notable projects launched by the New Zealand yard include the 52.88 metre Noble House and the 47.55 metre Lady Anastasia.