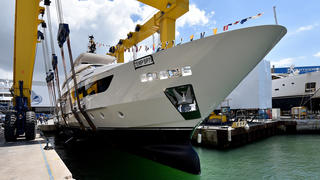 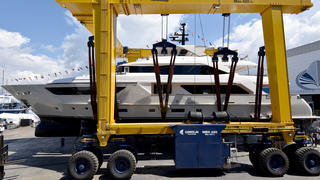 Italian yard Sanlorenzo has announced the launch of its latest yacht, which has been named SimSim. This 38.4 metre tri-deck cruiser was built from a GRP hull and superstructure, and is the fourteenth hull in the SD126 series. The launch took place earlier this month in Viareggio, with the Turkish owner in attendance to welcome his second Sanlorenzo yacht.

For SimSim, the luxurious interior was extensively customised to suit the owner’s tastes, with oak wood floorings and bespoke furniture. Her vital statistics include an eight metre beam, a maximum draught of 2.33 metres and a total interior volume of 314GT.

Accommodation is for up to ten guests split between an owner’s cabin, two doubles and two twins, while the crew quarters allows for a total staff of six people. Key features include a sheltered aft cockpit and a large superyacht sundeck, sheltered by a hardtop Bimini.

Power comes from a pair of MTU diesel engines for a top speed of 18 knots and a maximum cruising range of 3,000 nautical miles at 11 knots, drawing on a total fuel capacity of 34,200 litres.

Other superyacht projects currently under development at the Italian yard include the flagship Sanlorenzo 64 Steel, which is due to hit the water in 2019.