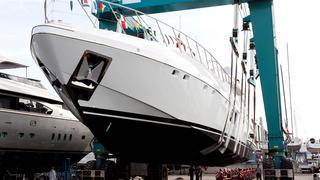 Overmarine Group has reason to celebrate as the Italian builder announces the launch of the second hull in its new Mangusta 110 superyacht series. Mangusta 110 hull No 2 was launched from the Overmarine Group’s private wharf in Viareggio, Italy, on April 29, 2015.

She will soon be delivered to her owner during an official ceremony and embark on her maiden voyage in the Mediterranean, making her public debut at the Cannes boat show in September.

Overmarine launched the first of its new model Mangusta 110 superyacht in November 2013. The new Mangusta 100 superyacht epitomises the brand's design and technical growth. Still maintaining a racy, sporty profile that Mangustas are known for, the new yacht has an up-to-date exterior aesthetic and greatly expanded outdoor living spaces. An evolution of the Mangusta 108, the new 110 boasts a spacious flybridge, which can host a second helm station.

The Mangusta 110 superyacht has performance capabilities to match her sleek and sporty looks. Twin MTU 16V 2000 M94 engines and Kamewa Rolls-Royce waterjets power her to a maximum speed of more than 33 knots.

Her interior accommodates eight in four staterooms, and the owner worked with Overmarine's in-house design department on the modern, contemporary interior styling.