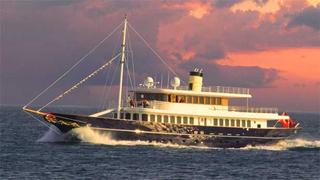 With the delivery of its first Classic 160, M&M and the start of work on a sister ship, Bilgin Yachts has shown that it truly believes owner attention is turning back to a golden era of luxury yachting.

The series grew out of a 36m design for a client who was considering a new gentleman’s yacht. He eventually chose to buy second-hand, but Bilgin looked into recent owner queries and decided that there was a market for modern incarnations of old beauties. They developed the 36m into a 48.7m design with six guest cabins, and began the project on spec. Ten months into the build, Bilgin was so reassured by interest from the market that they began the second hull, which will be launched in April or May 2013.

One benefit of classic new builds over first generation gentleman’s yachts is that clients can combine old style with modern technology. For example the first 160 features traditional Turkish wood craftsmanship, including mahogany interiors and high polished teak on window frames and cap rails. But on top of her bulbous-bowed steel displacement hull, the yacht’s superstructure is composite. She also features zero speed stabilisers and the latest AV systems.

But irrespective of modern improvements, some classic yacht characteristics are simply in keeping with current thinking. A stately displacement such as the 160 promises owners relatively conservative fuel bills with its twin 700hp MAN engines, offering a top speed of 15 knots and a cruising speed of 13 knots.

‘The fuel consumption that you have on modern megayachts, you don’t have here,’ says Yildirim Bilgen, sales director of Bilgin Yachts. ‘It is a user-friendly boat consumption-wise, it’s ocean-going with a long range – 4,000nm at 12.5 knots.’

He also feels that the interior space offered by the classic shape is greater than that of modern-style superyachts, whose designers often choose sleek low superstructures and smooth off corners to avoid boxiness. On the Classic 160 ‘the interior space is huge because you can use every single corner,’ as Bilgen puts it.