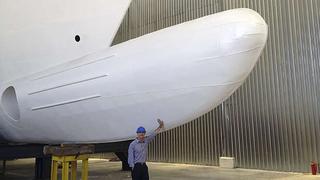 Did you know that a well-designed bulbous bow can increase the hull efficiency by up to four per cent? Bulbous bows were derived from ram bows, which were originally developed when triremes and biremes plied the Mediterranean seas. Because these craft were powered by oars they tended to be long and sleek, with rounded hulls to minimize wetted surface and get the most speed from their ‘engines’ (galley slaves).

In those days gunpowder was still only known in China for fireworks and the only way to attack an enemy was either to board and fight hand-to-hand, or to ram and sink it. Neither did much for the power train (slaves), but it led to long ornate rams that could penetrate a hull easily.

As sail power took over sea exploration, the ram bow died away until an incident in the American Civil War resurrected it. This was the sinking of the Union sloop of war Cumberland after it was rammed by CSS Virginia (formerly the Union ironclad Merrimack). After sinking Cumberland, Virginia went after the frigate Congress which had gone aground trying to escape. Congress was burned and Virginia made her escape to fight the very next day against the Union Monitor.

When a shot simply bounced off the two ironclads, the consensus was that ships had to be built with ram bows, because ramming was the only way to reliably sink the enemy. This set the tone for the next 50 years of warship building. However, another revolution – that of the armour-piercing shell and its ability to hit another vessel from several miles away, was to spell the end of the ram bow concept.

But an interesting corollary to this is that in the 1920s, David W. Taylor was tank testing the British battlecruiser HMS Leviathan. Leviathan (laid down by Vickers in 1899) was known to have superior speed and Taylor suspected it was due the large ram the ship had at her bow.

Taylor’s experiments led to the bulbous bow that is now seen on most commercial ships.