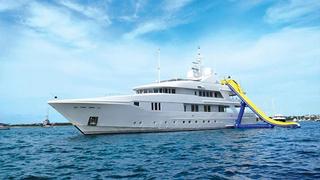 Previously named Ohana, she was delivered by US yard Admiral Marine in 1998 with refits in 2005 and 2011, plus regular maintenance since. In 2014 she went through a substantial a refit. Her engines were rebuilt and interior work included everything from soft goods to new Versace tableware.

Rhino has naval architecture by Glenn Bauer, interior styling by Donald Starkey and Mario Buatta, and is RINA classed.

Accommodation is for 10 guests in a master suite, two double cabins and two twins. The layout is very flexible and the two twins can be turned into doubles with king sized beds. All staterooms have full en suite facilities.

Powered by Caterpillar engines, Rhino has a cruising speed of 14 knots and top speed of 18 knots.