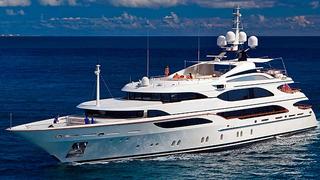 Jaguar was designed by Stefano Natucci and built by the Benetti yard in 2005 to Lloyd’s class and MCA compliant. She has an interior designed by François Zuretti, and can accommodate up to 12 guests in a master, VIP, two doubles and two twins plus two Pullman berths. Zero speed stabilisers have been installed and she had an extensive refit and upgrades in 2009.

This oustanding Benetti has been updated and modified to surpass her condition when she was originally launched. Jaguar has a split level master suite with private access to the foredeck and a VIP cabin on the sky lounge deck. She has one of the largest upper sun decks with a swimming pool and spa pool.