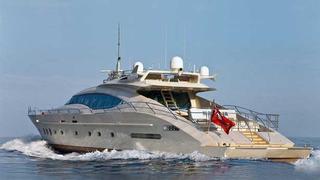 Built by Palmer Johnson in 2005 to Lloyd's class and MCA compliant, Natalia sleeps eight guests in three doubles and a twin cabin, while twin 2,750 MTU engines give her a range of 900 nautical miles.

Weekly rates start from €110,000 in high season and €88,000 in low season and there's a special inducement to book early: the first seven-day high season booking confirmed before the end of April 2012 will be accepted at €98,000.