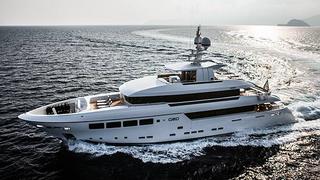 Launched as recently as June 2012 by Mondo Marine, the 40.8m motor yacht Okko is now being offered for charter in the Western Mediterranean next summer by Gayle Patterson at Imperial Yachts.

Her interior, designed by Giorgio Vafiadis, accommodates 10 guests in a full-beam master on the main deck, and two double and two twin staterooms on the lower deck. Okko is powered by twin 1,500hp MTU engines giving a top speed of 16.5 knots, a cruising speed of 14.5 knots and a range of 3,000 nautical miles at a more economical speed.