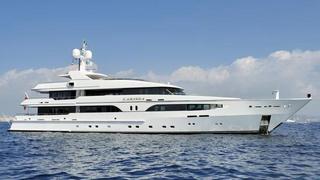 She was built by Amels for the present owner and has only ever been used privately since her delivery in 2004. Larissa has been maintained to the highest standards and has seen very little use, which accounts for her low engine hours.

The Donald Starkey designed interior of the yacht was executed by Metrica. Between them they created a light, comfortable interior for this family yacht which is nevertheless sophisticated in execution. The owner’s cabin comprises a private sitting room, a double cabin with direct access to a private deck area on the foredeck, twin dressing rooms and a large en suite bathroom. Two twin and two double guest cabins are located on the lower deck and each twin cabin is fitted with an additional Pullman berth. Previously priced at €27.95 million, Larissa is now asking €24.9 million and is available to view at the Contre Jetee in Monaco on Wednesday, July 6th between 1pm and 7pm.