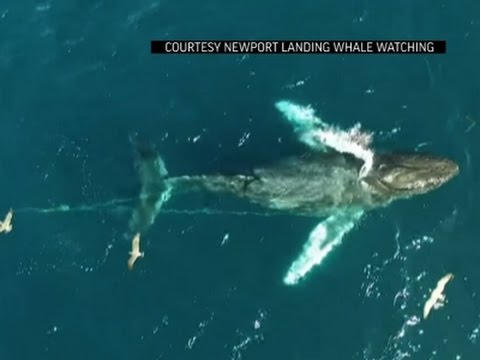 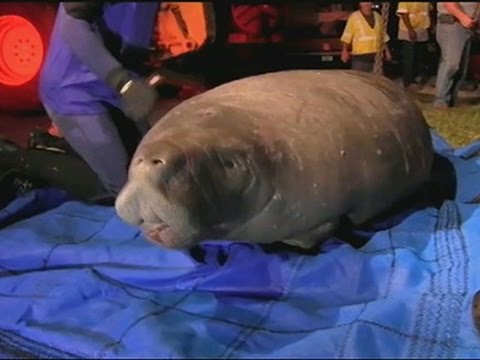 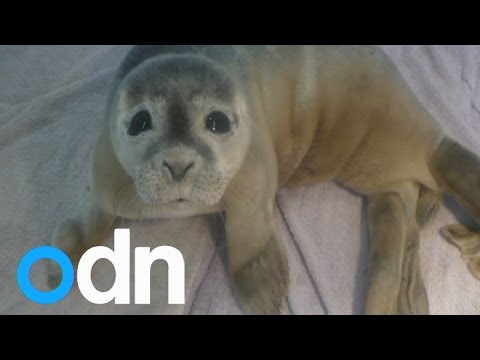 A pair of friends stepped in to rescue a fin whale that had become trapped in fishing gear off the coast of Fuerteventura.

The friends noticed that the whale was alone and then discovered she was stuck in an illegal fishing device, which was anchored by ropes and hooks.

The duo then spent more than an hour trying to free the whale, that had ropes wrapped around its tail and body and hooks in its mouth — using snorkelling equipment and knives.

One of the men, Cesar Espino, said he “did not hesitate” about jumping in the water and trying to free the whale.

“Each movement the whale made was harming it,” he added. “Therefore I entered the water with a knife and I positioned myself in front of the whale so it could see me; she – it was female – looked at me as if asking for help.”

Once the whale was free the pair followed her to ensure that she was swimming properly.

2. Humpback whale disentangled from hundreds of feet of fishing line

A humpback whale had to be set free by a team of rescuers after it was founded tangled in hundreds of feet of fishing gear near Los Angeles.

The whale was initially spotted in trouble on the Friday (October 30, 2015) and rescuers from the National Oceanic and Atmospheric Administration managed to partially free it before it became agitated and swam away.

It was then located the following day off La Jolla Cove in San Diego and a team from SeaWorld San Diego finally freed the whale after more than three hours.

“We hope we gave this whale a second chance at life,” said Kelly Terry, a spokeswoman for SeaWorld.

A 1,000 pound polar bear had to be painstakingly rescued after he became tangled in fishing nets off the coast of Alaska last year (September 6, 2015). The U.S Geographical survey detailed the extraordinarily lengths needed to free the bear. A helicopter had to be used in order to get close enough to fire a dart and the sedate it. Straight afterwards they used boats to support the bear in the water to stop it drowning. Once fully sedated the bear was untangled and released back into the wild.

A young humpback whale had a lucky escape after it was spotted trapped in fishing equipment near Washington, New Zealand last year (September 13, 2015). A specialist whale rescue team from Kaikoura in the South Island were flown in to save the nine-metre long juvenile humpback. The team used a police tender to get closer to the whale and spent several hours cutting him free.

“It was entangled in the cray pots and the buoy. It was just a baby whale, a juvenile, and having difficulty and it was in a little bit of distress,” Wellington Police maritime unit's constable Kyle Smith said.

“They cut the lines off him and he swam away out to sea and he seemed pretty happy.”

In February last year 19 manatees had to be rescued after getting trapped in a storm drain in Florida. Staff at Seaworld Fl. were called in to aid the police and firefighters who had to work through the night using heavy earth moving equipment. It is thought that a sudden drop in temperatures caused the manatees to go into the drain in search of warmer water.

A whale had to be rescued in August last year after plastic bags got lodged in its mouth restricting its breathing. The whale brought its grievance to the attention of a group of fisherman by swimming up to the their boat and nudging it before rising its head out of the water to be rescued before swimming away. This incident highlights why plastic rubbish is one of the greatest threats to the world's oceans.

Two turtles who were tangled in some fishing line were rescued off the Californian coast after being discovered by the U.S Coast Guard in June 2015. The Coast Guard had originally been sent out to look for a suspicious parcel floating in the water, which is a known drug-trafficking area. Realising the mix-up upon arrival they set about freeing the turtles. The fishing line had begun to wrap itself around their necks and was getting tighter as they struggled. However, with the help of a Swiss army knife both turtles swam away unharmed

A birdwatcher discovered a seal in Lincolnshire marsh, which had been washed up by tides from the North Sea. Ian Ellis said he was alerted to the seal as curious cows were standing around. He called a nearby seal sanctuary which took it away for it to recover. Staff at the sanctuary assessed the seal and determined that it was only a week old and was very underweight. Luckily however, they got to it in time and the seal, which has since been named celebration, is expected to be able to return to the water.