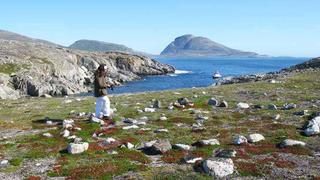 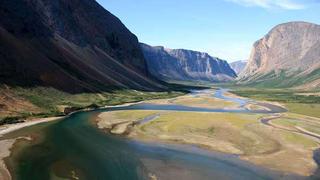 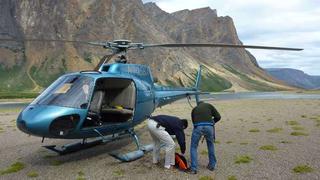 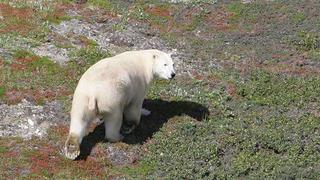 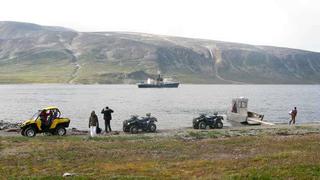 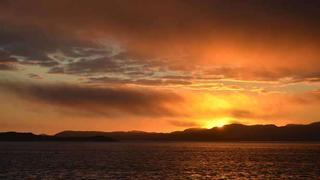 Very few people get to experience the unimaginable vastness of the Canadian Arctic. This huge, seemingly empty landscape is on a scale that is difficult to conceive. The roar and thunder of a nearby waterfall, and the soft buffeting of the wind, are the only sounds. The nearest town is 150 miles to the south, and the nearest road is over 300 miles away.

The foreboding greyness of the fjord and its icy waters belies the abundance of plant and animal life. Look closely, and a myriad of colours can be seen amongst the stones  lichens of the brightest green and orange; fire-red succulents growing in the lee of a small boulder; blueberry and mountain cranberry bushes, heavy with fruit, hugging the ground; moss the colour of emeralds, spongy under foot; puffs of arctic cotton clustered around a low-lying pool. The fecundity of this land is surprising, and delightful, and for those of us from Europe or the US, the unfamiliar rhythms of Arctic life are confusing and enchanting in equal measure.

This huge, untamed wilderness with its soaring peaks and ice-scoured valleys, seems worlds away from the cruising grounds we have become accustomed to, but it is nearer than you might think. It is common practice for yachts to spend their winters in the Caribbean and their summers on the east coast of the US.

However, rather than stopping at The Hamptons or Rhode Island, if you were to continue north for a few days you come to Nova Scotia and Newfoundland. Another few days cruising and you come to the north Labrador coast and the Torngat Mountains National Park. It really is that accessible, yet the Canadian National Parks department estimate that fewer than 300 visitors a year come to this magical place which looks rather like a cross between the Scottish highlands and Yosemite National Park.

Getting there is one thing, taking advantage of all that Torngat has to offer is another matter. For our visit we joined Akula, a 59 metre ex-Dutch Navy pilot vessel that has been converted into an explorer yacht. Her owner is a keen helicopter pilot and wanted a boat that could accommodate helicopter operations with ease.

Part of what makes Akula such an ideal vessel for this sort of remote environment, apart from the helicopter, is her ancillary vehicles and vessels. When cruising the remoter corners of the globe, where docks, harbours and pontoons are in short supply, the ability to get ashore and travel on shore, is important.

Being able to experience nature in the raw, rather than merely watching it glide past the windows of the yacht, is essential. Heli-hiking is a favourite pastime of the owner, and the helicopters ability to drop him onto a glacier or at the foot of a challenging peak far inland is integral to the way he and his family use the yacht.

Scouting the islands and slopes of the fjord for wildlife, the helicopter can quickly direct the tender to where the polar bears are ambling across the foreshore, or where a wolf family is roaming the valley floor.

And that, to me, was one of the many surprises of Torngatfar from being rarely-seen endangered species, polar bears seem to be relatively common, well-fed and flourishing.

It seemed strange seeing polar bears wandering amongst the flowers and greenery rather than standing on an ice-flow, but during the summer months this is the norm. As well as polar bears, black bears roam the valleys and shores of the fjord, as do wolves.

This part of the world is wonderful, but to get the full experience you really need to go ashore. During my few days on board we heli-hiked in beautiful valleys, we explored the islands and went ashore from the tender, and we put three ATVs ashore to go exploring.

What is particularly appealing about Canada and Greenland is that they are very accessible from the east coast of the US. For a yacht on the US eastern seaboard, these cruising grounds are much nearer than Alaska or the Amazon, and barely a weeks sailing from Rhode Island.

With the right equipment, and a sense of adventure, its possible to see the Northern Lights and polar bears from your own yacht, and to experience the extraordinary peace and solitude that can only come from being a very long way from civilisation.