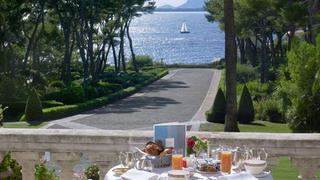 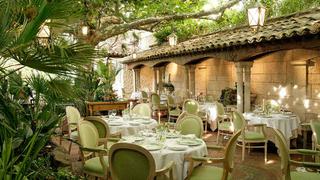 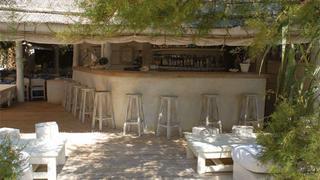 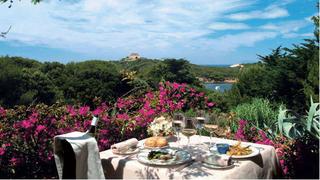 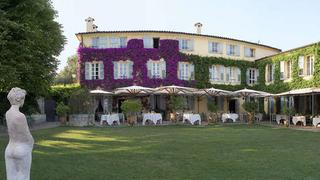 There is an abundance of fine restaurants on the Cote d’Azur, but here are five that superyacht owners have told us have an extra special ‘je ne sais quois’…

Guests dining at the Hôtel du Cap-Eden-Roc’s restaurant savour delectable dishes such as bouillabaisse de Méditerranée and langoustines royales en carpaccio while admiring one of the best views in the Mediterranean – overlooking the Lérins islands.

Fifty years after its creation by the great chef Louis Outhier, L’Oasis is famed for its opulent, Romanesque-style gardens and fusion cooking. Today the Raimbault brothers, Stéphane, Antoine and François, are the brains behind the delectable Mediterranean food with an Asian twist (Stéphane lived in Japan for nine years) served at this Michelin two-star restaurant at the entrance to La Napoule harbour.

Fish is bought daily from the Marché de Forville in Cannes, and transformed into dishes such as flaked crab with guacamole in a lobster salad and purslane with curry oil. The Kobe black beef grilled in teppaniyaki and served with imperial soy sauce is also a diners’ favourite. Sommelier Pascal Paulze has also created an exceptional wine list, which includes one of the world’s finest collections of Provençal wine.

Arguably the world’s most famous beach club originated in 1955 when Brigitte Bardot was filming ‘And God Created Woman’ on Pampelonne Beach. Director Roger Vadim asked a certain Madame de Colmont if she could cook for the cast from her little wooden beach hut – and, a generation on, her son, Patrice de Colmont, is still catering to the fashionable and famous on the stretch of white sand between Saint-Tropez and Ramatuelle.

The Provençal-style beach bungalow is still at the heart of Le Club 55, set amidst tamarisk trees and bamboo thickets with wooden walkways and a silvery wooden pier leading up from the water’s edge. Beneath sails strung from trees or woven reed shades guests dine at tables that are invariably graced with a bottle or two of Chateau de Pampelonne Rosé, while indulging in a spot of people-watching or eyeing the sun loungers on Pampelonne beach.

Seasoned waiters serve up gourmet creations such as beef tartare, hamburger de cheval and lobster with marinated vegetables. However, most diners prefer to graze on the panier de crudités – fresh vegetables served with a dipping sauce, offered up in a large cork bowl. Grilled fish is the house speciality, try the John Dory (St Pierre) or sea bream. However, for many aficionados, the poisson froid (cold sea bass) is the best dish. To complete the Saint-Tropez experience, and the meal, order the tarte Tropezienne, a yellow pastry cream-filled brioche. Be sure to reserve, seating is at 1pm and 2.30pm.

On the western side of the island of Porquerolles, across from Saint-Tropez and opposite Le Fort du Grand Langoustier, is a lovely hotel, Le Mas du Langoustier, with a one-Michelin-star restaurant, L’Olivier.

Favoured by Parisians, who know a thing or two about food, award-winning chef Joël Guillet prepares a cuisine with Mediterranean and Provençal flavours. A selection of menus include such delights as roast duck breast in a fig leaf, foie gras fondant and chanterelles, roast fillet of lamb with coconut and pineapple roll with basmati rice, and desserts such as chocolate biscuit with warm nut filling, white chocolate cream and caramelised nuts.

Dine alfresco amidst pine and eucalyptus trees or in the French traditional-style dining room with views of the beautiful gardens through large picture windows. Sample the estate’s Domaine de I’Ile de Porquerolles wine, and complete the experience with an after-dinner stroll through the vineyard.

The Michelin two-star La Bastide Saint Antoine is set in the heart of a 1,000-year-old olive grove in Grasse, perfume and flower capital of the world, which lies just north of Cannes in the hills.

In homage to this, chef Jacques Chibois uses flowers in the way that other chefs use herbs and spices, adding unusual flair and flavour to dishes. Vintage olive oil is also used in the preparation of many dishes, including desserts; while, for four months of the year, the underground ‘Black Gold’ truffle makes its presence felt on the menu.

From October through to April, meals are served inside in the restaurant’s elegant dining rooms but, as soon as the warm weather comes to the Riviera, guests dine on the terrace under towering trees in a garden ablaze with flowers.