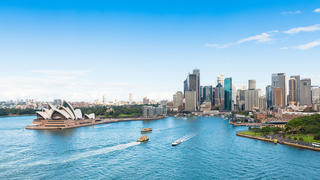 A marina in Sydney is set to undergo a 30 million Australian dollar redevelopment in order to attract more superyachts. Sydney Superyacht Marina in Rozelle has been given permission by the NSW Department of Planning and Environment to double the amount of berths at the site.

As well as increasing the number of berths from 24 to 43 the development will also see the creation of a new yacht club, several new restaurants and cafes and 7000sqm of marine retail and marine commercial space.

The marina was first built to accommodate visiting superyachts during the Sydney Olympic Games 16 years ago. The marina has seen a surge in the number of superyachts visiting Sydney since then.

“Demand for the superyacht industry is growing and it has been growing steadily since the Olympics in 2000 when we built the marina,” Brian James, chairman of Sydney Superyacht Marina, said.

“A large part of the superyachts in Sydney are domestic; we have domestic owners and we have a percentage which are international visitors from the Mediterranean, the Caribbean and from Asia, in fact from all over the world.”

This demand for superyacht berths has also been seen elsewhere in the city. Last year Spit Marina in Sydney also announced it was undergoing an expansion to attract more superyachts. There are also currently plans for a new marina in Berry's Bay in Sydney.

The development plans in Rozelle were objected to by some local residents on the grounds that it would create noise pollution and the fact it was built as a temporary facility on public land and should be returned to the public. Despite 137 objections out of 148 public submissions over the plans, the NSW government has still approved the development.

The developers have tried to reassure residents that the plans are simply making more effective use of the current facilities.

“There is no development creep,” Mr James said. “We are being more efficient about the use of the water area — it has not grown from that which our clients currently enjoy.”

9 days on a superyacht around Sydney Harbour