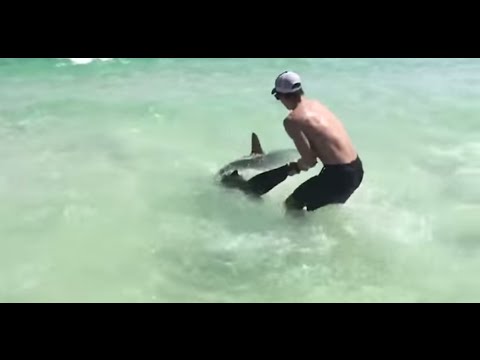 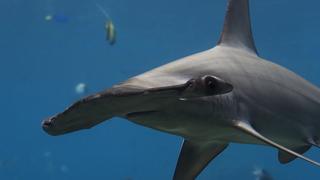 Two brothers bravely stepped in to rescue a hammerhead shark that had become trapped in a fishing line on a busy Florida beach. The 10ft shark was spotted by Logan and Marcus Lakos near a beach in Destin, with a fishing line wrapped around its head and hooks stuck in its mouth.

Marcus captured the rescue and the video of the incident has now been watched by more than a million people.

“My brother, once realising it was injured, swam out to bring it to shore away from people still in the water,” Marcus said on YouTube. “The shark was pulled to shore and we realised it had several deep sea fishing hooks in its mouth as well as steel fishing line tangled in and around its head.

“My brother, along with help from bystanders worked to get the hooks out and save the dying shark. He was able to pull the shark into deeper water until it was able to swim away safely in an attempt to avoid further injuring itself or the public.”

Logan, who is a keen fisherman, later told press that it was adrenalin that made him jump in and try and free the shark.

“I started pulling it in and it was kind of scary, but hammerhead sharks aren’t really that dangerous to humans,” he said.

During the video there is a lot of commotion from beach goers watching the men try to free the shark.

“All of the distress and yelling heard in the background was caused by a natural fear from certain individuals and lack of understanding the situation as well as the behaviours of hammerhead sharks,” Marcus added. “Once bystanders realised we were trying to help the shark they quickly did what they could to help.”

There have been a number of high profile shark attacks in the past few months. Champion surfer Mike Fanning managed to escape an attack after punching a Great White during a competition in South Africa. However, despite the current media attention a recent report showed that the risk of shark attacks has actually plummeted since the 1950s.

10 of the best places to swim with sharks