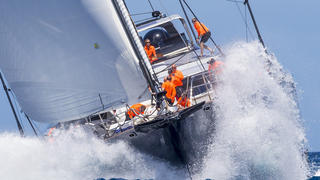 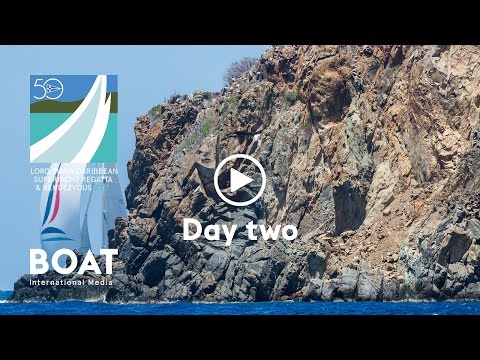 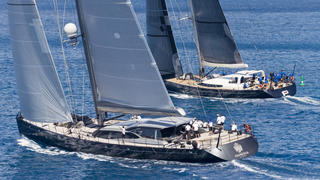 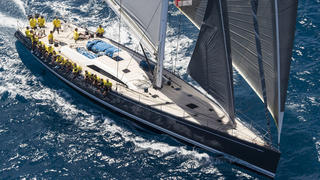 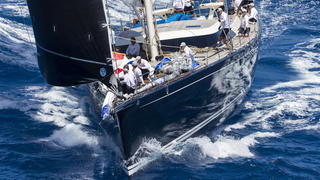 Although today’s course was vastly different from yesterday’s the song was very similar in each class. The well refined Nilaya (Reichel/Pugh design from Baltic Yachts) won Class A, Ganesha (Dubois design from Vitters Shipyard) yelled “touché” at P2 (Briand design from Perini Navi) after turning the table in Class B, Freya(Swan 90) showed its pedigree by winning Class C and Perseus 3 (60 metre Perini Navi) captured Class D.

Day races that circumnavigate islands such as the Isle of Wight in the U.K. or Block Island in the U.S. are iconic contests in the world of racing. They’re short, sharp and sweet and offer a variety of challenging conditions such as shifty winds and tidal currents. The race around Virgin Gorda has to be added to the list. It has all of the ingredients the others offer plus one they can’t begin to replicate—the most stunning shades of blue waters.

“It’s similar to any race around any island in the world, except it’s the British Virgin Islands and a bit more exotic than most places,” said Ganesha tactician Matt Humphries.

After racing for two years with nary a sniff of victory _Perseus 3 _ has pulled off back-to-back wins. Today’s victory was all the sweeter because she was also the first boat over the finish line.

“Today’s race was just absolutely over the top,” said crew boss Peter Grimm. “We thought yesterday was big, but today we hit it out of the park—winning our class and first boat to finish. It’s super exciting.”

Although Perseus 3 was first across the line she was not the elapsed-time winner. That honour went to the very well refined Freya. The German Frers design nipped Perseus 3 by more than 2 minutes on elapsed time.

“We had a nice day today. It was beautiful conditions,” said mainsail trimmer Ken Keefe. “We had every style of racing you could have. It was a good test of sailors and there’s not a better place to race.”

Keefe helped oversee the build of Freya between 2010 and 2012. It was launched in the fall of 2012 and won its class at the Loro Piana Caribbean Superyacht Regatta & Rendezvous in 2016 and 2014.

“Freya’s a very well-rounded boat. We don’t have a weak spot,” said Keefe. “We try not to make mistakes but yesterday we were within 1 second of the start line and it’s a 5-minute penalty if you clip the line, so we backed off a bit today at the start. But Freya’s a good all-around boat; good crew, good owner, the whole team is very good and Kimo (Worthington) does great job on tactics. It’s a nice program.”

In Class B, Ganesha and P2 can’t stop stopping each other. P2 won yesterday’s race by 22 seconds but Ganesha won today’s race by 1 minute and 27 seconds. P2 held the upper hand early in today’s race, leading by about 2 minutes at the top of Virgin Gorda.

The two yachts were similar speed down the eastern side of the island, but Ganesha was able to take a slight bit of time out of P2’s lead. According to Humphries, Ganesha was able to overtake P2 by sailing through their lee side after rounding Round Rock at the bottom of the racecourse.

“They weren’t going to let us go to weather, so we had to pick our moment to go to leeward,” said Humphries. “There was lots of discussion about how and when to do it, and everything fell into place. We got bow forward on them and went hard on the wind after the Seal (Dog) Islands, we focused on defending that spot.

“It was a great race, as close as yesterday. Fortunately we got the upper hand,” said Humphries. “It’s always a tough tussle with P2. Today we defended well and the boss did a great job driving. We wanted the result today and got it.”

After an exhilarating day on the water owners, guests and crew were looking forward to a fun evening at the End of Regatta Beach Party, held at Bitter End. With more than 500 guests, a DJ and live entertainment it promised to be a night to remember.

To see more of the racing action don't miss our gallery of the best pictures from the regatta so far. Keep up with all the action via the Boat International website or follow the event on social media using #loropianasyr on Instagram, Twitter and Facebook.