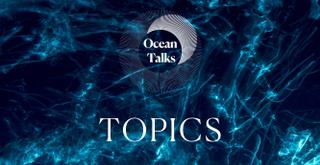 The topics that will be discussed at Ocean Talks include:

Be one of the first to see inside the newly launched Alucia², one of the world’s most advanced explorer yachts. The 85.3 metre yacht will replace the current Alucia research yacht, which appeared in the BBC’s highly popular Blue Planet II series, and was involved in scientific missions including assessing sperm whale populations in New Zealand, tagging manta rays in Raja Ampat, searching for giant squid in the Ogasawara Islands and a full-scale survey of the coral reefs in Palau.

The newly refitted Alucia² will include a forward helicopter landing deck with adjacent hangar, a garage capable of housing three 1,000 metre manned submersibles, a dedicated ROV deployment bay and aft deck launch and side boarding systems for scuba divers. The boat is part of OceanX, a non-profit ocean exploration and media production company spearheaded by the American billionaire and philanthropist Ray Dalio, his son Mark Dalio, and Hollywood director James Cameron. Alex Flemming, part of the yacht’s management team, will present what exciting adventures await her.

The State of the Oceans

In-depth, rigorous analysis of our oceans at this point in time, from some of the world’s most eminent scientists. Including which areas and species are most affected and how, what conservation work so far has yielded immediate positive results, and what key research still needs to be carried out and why.

Stewart Campbell, Editor of BOAT International, will join a panel of industry pioneers, to showcase what great things the superyacht industry is already doing to improve the health of our oceans, and to discuss what other plans are due to launch shortly – from programmes that encourage a yacht’s crew to join forces with local communities to carry out conservation work, to stories of inspiring yachts.

Owners are increasingly interested in adventure travel, and each year more yachts are heading to remote areas of scientific importance, to witness the spectacular natural environment and wildlife. Do these visitors have a duty to help the global research effort? And if so, how can yacht designers, engineers, brokers and expert travel companies, help them to do so responsibly?

We look at what systems are already in place, and can be utilized straight away – including a presentation from members of The Polar Citizen Science Collective, an organisation that facilitates ship-based citizen science programs from start to finish, on topics including cloud observation, whale tracking, and sea ice observation.

Around 25% of all marine species rely on coral reefs for food, shelter and breeding, and yet their future is under threat, due to overfishing, ocean acidification and pollution. Richard Vevers, CEO of the Ocean Agency – and who starred in the Netflix exclusive Chasing Coral – is now working towards a global plan to save corals, by protecting the reefs that are the least vulnerable to climate change, and have the greatest capacity to repopulate over time. He will join other global coral specialists to discuss which areas are most damaged currently, and what the superyacht community can do to help.

Perhaps no ocean conservation issue has received more press lately than the topic of plastic pollution. A panel of experts from anti-plastics organisations, including Frederikke Magnussen, co-founder of A Plastic Planet, will share their valuable insights on the barriers that stand in the way of a plastic-free planet, and how they can be overcome.

Plan your trip to Ocean Talks