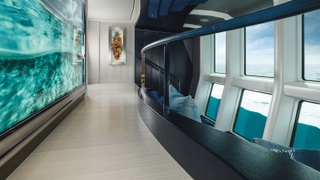 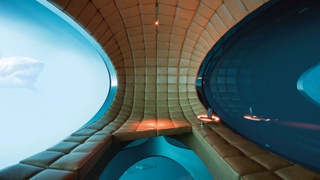 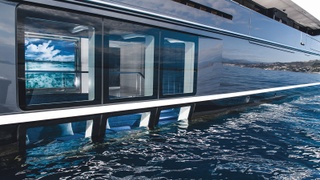 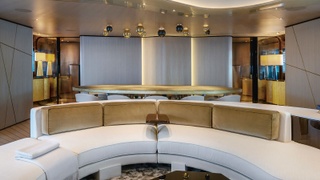 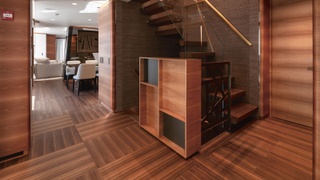 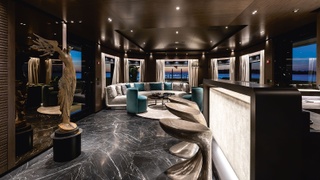 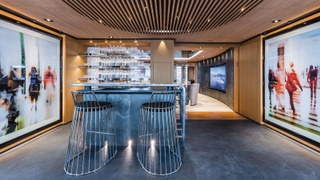 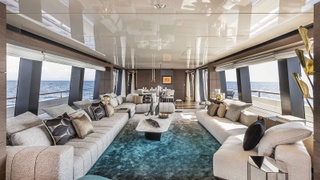 From a room with a view (of the fish) to wood with a gnarly past and the style that’s taking on art deco as the decorative theme of choice, Caroline White explores the interiors trends shaping superyachts in 2019

There are few fantastical features on land or sea to rival the underwater room. Rule-breaking 142.8-metre Sailing Yacht A, designed by Philippe Starck, had a viewing nook beneath the waves, but 83.5-metre Savannah’s Nemo room showcased a much bigger version with spectacular results: the half-submerged windows provide a thrilling duel view and theatre-style seating angles attention where it is naturally drawn – to the scene beneath the waves.

Of course, there’s plenty of tech behind the trick: Feadship spent years researching glass as a structural material and created the effect with several two-inch-thick laminated panes then doubled it – one window flush to the hull and another flush to the interior. Advances in glass research meant that when Abeking & Rasmussen built the Harrison Eidsgaard-designed 74.5-metre Elandess (delivered last summer, only two years after Savannah) they could make the windows of her “Neptune” room even bigger. The six glass panels from GL Yachtverglasung are nearly 10 centimetres thick and so strong they don’t require storm shutters. At 490 kilograms for even the smaller ones, they had to be installed by crane. “We created amphitheatre seating to take advantage of the height of the glass, as well as seating that is integrated with the walls, stairs and floors. Inspired by gentle waves on a beach, the all-blue carpet and wood surround the window to frame the spectacular views out,” says Peder Eidsgaard, Harrison Eidsgaard director and designer.

The effect, says Nick Houghton, Harrison Eidsgaard project manager, is mesmerising. “Physically, it sits you within the environment you’ve chosen to spend your time in, physiologically it’s pure escapism. The privileged view under the waterline is ever-changing and one of peacefulness. It is the greatest cinema room a yacht can have.”

Suitably for such a jewel of a space, the general arrangement places it at the heart of the onboard lifestyle, says Ewa Eidsgaard, Harrison Eidsgaard director and interior designer: “Guests pass though this room when coming onboard, and also when going for a swim at the transom.”

We know of two more ultra-secret superyachts taking shape in major shipyards that will feature underwater rooms and expect more: as owners seek an ever-closer relationship with the seascape, this trend ventures as close to the drink as you can get without strapping on a snorkel and jumping off the swim platform.

It’s been hot in residential design for some time, but mid-century style is finally challenging art deco as the go-to decorative theme on board. This pared-back, curvaceous, nostalgic form chimes perfectly with the wider trend towards lower-key, home-away- from-home yachts. Setting the bar was 49.9-metre Rossinavi Aurora, launched in 2017, in which interior designer Achille Salvagni created a “soft, calm and gentle” atmosphere using flowing shapes with a distinctly mid-century air, as well as vintage lamps. Since then it’s been difficult to find a yacht that doesn’t include at least a mid-century-style armchair or two.

The new 47.6-metre Baglietto Silver Fox had a distinctly mid-century decorative scheme; and the fact that this interior was penned by the yard for a spec boat, with the aim of pleasing the widest range of tastes, speaks to this style’s pervasive appeal. Because of its simplicity, it’s also a style that’s easy to fold into broader decorative schemes. “The way people are wanting the interiors designed is slightly more eclectic in look, so it isn’t purely one style, your furniture can be mid-century mixed in with built-in things,” says Mike Fisher, creative director of Studio Indigo.

Things change. And they change a lot faster when you’re young. “In the old days, superyachts were built for middle-aged men who had made their fortune,” says Mike Fisher, creative director of Studio Indigo. “Now the client base is much younger; the average age is more like 40 and they all have families.” They are looking for a “less contrived, less over-designed boat, less ostentatious than their parents’; more personal, more homely”. And crucially, whereas an older person in a more sedate phase of life may like their interior fixed and “designed down to the last detail”, younger owners need spaces that will grow and develop as quickly as their lives and families. So convertibility is key.

And that’s true however large a space you are planning – Francesco Paszkowski and Margherita Casprini certainly built it into 72-metre Tankoa Solo, which debuted at the 2018 Monaco Yacht Show. “There are a few double-duty areas,” says Paszkowski. “The hair-dressing-massage room on the upper deck can be converted into an additional cabin, with a bathroom close by; on the owner’s deck his independent TV room is convertible into an additional guest cabin.” He also points to the cosy winter garden his team placed on both Solo and the 69-metre Tankoa Suerte, which does double duty as a glamorous bar and “check-in” desk.

And rather than packing on veneers, “We use a lot of fabrics in the interior because they are less expensive ways of changing the look of a boat.” So when your pink-loving 10-year-old becomes a teen, the decor of her cabin can keep pace quickly and affordably, and there’s space to personalise communal areas with the photographs, souvenirs and even furniture that a family gathers on their adventures. “We call it robustness,” says Fisher. “It’s an ability of the interior to be adapted by the owner over time.”

Rugs to roll for

Wall-to-wall cream carpets used to be standard issue on superyachts, but in the past months more and more boats that grace the pages of Boat International feature rugs on wood floors. Just like a modern home – and for a new, younger generation of owner, that’s precisely the point, says Martina Zuccon of Zuccon International Studio. “The owners’ desire to experience on board the same feeling they have when in their own home: the use of the carpet is clearly a reference to the typical domestic living room.” She notes that the flexibility trend also feeds into the rug theme – since they facilitate a super-quick decor change – and also the continual strivings of designers to create a sinuous indoor/outdoor flow. Take Zuccon’s future-facing new 31 metre Sanlorenzo SL102, where the aft deck teak continues into the asymmetrical saloon, accented but not interrupted by a rug. In terms of the style of rug in vogue on board, Zuccon says those “with natural look and finish” are most popular, to complement the surrounding seascape.

Silky Tai Ping rugs are a perennial favourite, sometimes carved into ripples, while on recently launched Four Flowers III (the first Custom Line Navetta 42) Luca Bombassei architetti added a huge saloon rug that fades from aquamarine to white, like waves lapping at a powder beach. And it’s interactive: the effect is enhanced as feet push the surface this way and that, like the chop of the sea.

Open or “country” kitchens have been popular for some time with US owners, who, according to stereotype, have a less formal relationship with their crews, and that extends to watching from the dining table as meals take shape. “Eating is part of the experience,” explains Mike Fisher. “They want the food to be hotter, fresher, simpler.” The result of this is a logical progression of the country kitchen, making even more of a spectacle out of the once- humble galley. In one project that Fisher worked on recently, the young American client requested a “living kitchen” that he promoted to the space that would otherwise house the upper saloon, so that he could cook for his friends as he did at home, or have a chef in who they could watch.

The 83-metre Amels Here Comes the Sun takes the glamorous galley concept even further with a bridge deck kitchen that has a huge opening on to the aft deck, where up to 24 guests can dine. They can speak directly to the chef as he cooks, while watching their steaks sizzle and make last-minute requests for the chef to conjure up before them. The designer Andrew Winch said on board the yacht, “You are basically in a restaurant, upstairs. The chef is so good that he can do everything simultaneously and there are no service issues, no hot plate issues.” On the 106.5-metre Dream, the grandest dame to debut at the last Monaco Yacht Show, there’s a dining saloon set up around a central grill for teppanyaki and decorated in black-and-red lacquer like a glossy bento box.

Modern designers may have spent the past 40 years getting wood out of yacht interiors, but now it’s back – albeit transformed. It’s not the glossy teak and mahogany of classic yachts that’s making a splash, but rawer, textural timbers bringing either a contemporary natural feeling or a beach house vibe.

Riza Tansu used gnarled oak floorboards in the bright modern interior of 43.7 metre Cyclone. This is wood with character. On Solo, Margherita Casprini and Francesco Paszkowski clad the sauna with wood taken from a medieval Finnish castle.

“A sauna is not an unusual request on superyachts. How to make it special?” asks Paszkowski. “The choice of this material made this area different from any other yacht on one side and linked the sauna itself to Finnish tradition, a kind of homage to the sauna’s origin.”