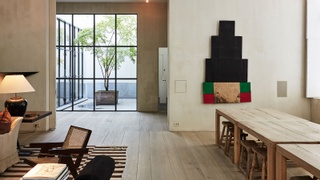 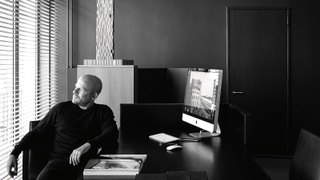 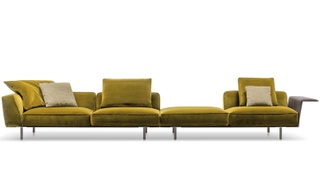 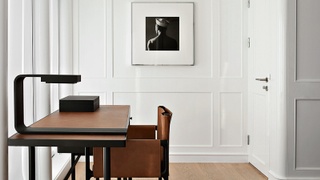 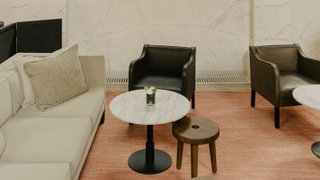 From where Vincent Van Duysen and I are sitting, in a peaceful room overlooking a palm tree, you wouldn’t guess we are right in the epicentre of the Salone del Mobile furniture fair in Milan, above the stand he designed for Molteni&C Dada. In the middle of trade-show frenzy (there is an hour-long queue to access the Molteni&C space alone), the Belgian designer and architect of the moment has managed to create an oasis of calm for the brand he has been at the creative helm of since 2016.

“It’s all about this serene beauty that I want to create in all my projects – just to try to calm down the senses,” Van Duysen says of his distinctive aesthetic. “I don’t use colour to shock visually. Visual silence is very, very important for me.” Look at any of his work, and this will resonate.

But the road that led to his signature style wasn’t straightforward. After earning his architecture degree in Ghent, Belgium, he moved to Milan to work with Aldo Cibic, then an associate of Ettore Sottsass, the Italian modernist architect and designer known for his bold and unapologetic use of primary colours. It was later, when he moved to his first home in Antwerp in the late 1980s that he started to work with “natural oaks, linens, neutral colours for the walls, beautiful natural floors. And that’s what I’m still doing,” he says. “I am a child of postmodernism but I’m also Belgian, and I don’t think we are very colourful people, it’s in our genes. We are much more attracted by desaturated, calming, natural-looking colours.”

His latest collection for Molteni&C has hints of yellow and blue-grey, inspired by “mid-century modernism in the West Coast – you can see it in the architecture.” At Salone he also debuted Gregor, a modular seating system with a leather base and generous-sized cushions – a prime example of his ability to create spaces that look sleek yet feel warm and welcoming too.

In 2016 Van Duysen caught the attention of the yachting world (and graced the February 2017 cover of BOAT International) with his first-ever boat, 39-metre explorer RH3. The owners tasked him with the project after he’d worked on their house, and he kept a strong residential feeling throughout by cleverly playing with materials (instead of polished wood, he used French oak “almost like the colour of driftwood”), sticking to a natural palette for cushions and upholstery, and by mirroring some of the house’s design elements, such as the leather dining booth. “I spent a week on board cruising the Bahamas, and it was heaven.”

When we meet, his first-ever hotel project is about to open in Antwerp. Almost five years in the making, August is a former cloister of Augustinian sisters, now turned into a 44-room hotel with a restaurant, pool and spa. His studio collaborated with Molteni&C on the furniture and Flos on the lighting, but everything reflects a very Belgian taste: two gardens are by the late Belgian landscape designer Jacques Wirtz, and staff uniforms are by Christian Wijnants (one of the country’s most celebrated fashion talents).

There is no break in sight for Van Duysen: he is simultaneously handling a few residential projects in Paris, Milan and Los Angeles, department stores in Thailand and Munich, plus a large-scale collaboration with a fashion brand, which is still top secret.

The most exciting of them all, however, is his own holiday residence near Comporta in Portugal. “We have been working on it for three years. It’s right by the ocean and totally unspoilt, with several kilometres of untouched beaches. There are no high-rise [buildings], it’s pure nature – you have the invigorating effect of the ocean, the changes in its colour, the breeze, the smell.”

He’s been holidaying there for years but it took some time to find a plot, until the former owners decided to sell it. He’s now turned it into a vast home with a pool, but is still “very respectful of nature”. The building is designed to “blend into the dunes”, and inside it are “warm materials, terracottas [and] beautiful solid Brazilian woods. It’s going to be my summer sanctuary,” he adds – but if the crowds around his Salone del Mobile sanctuary are anything to go by, he may have a harder time keeping visitors at bay than expected...

Privacy as standard: Properties for sale in remote destinations