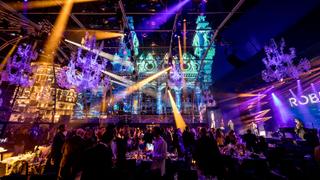 Book it now: The Monte Carlo Gala for the Global Ocean 2018

The second annual Monte Carlo Gala for the Global Ocean will return to Monaco this September to support the work of the Prince Albert II of Monaco Foundation. Following on from the successful inaugural event, which helped the Foundation fund 37 new marine conservation projects and two schemes to help fight plastic pollution, this year’s edition will once again be held overlooking the Mediterranean on the terraces of the Opera Garnier.

Taking place on September 26 to coincide with the Monaco Yacht Show, the 2018 Gala has once again seen a number of celebrities sign up as event chairs and co-chairs. An honorary position which sees these high-profile faces lend their names and support to the event, this year’s event chairs include Madonna, Orlando Bloom, Pierce Brosnan, Hugh Grant, Goldie Hawn, Eva Longoria and Diane Lane. They will be joined by co-chairs including Toni Garrn, Karlie Kloss, Adriana Lima, Karolina Kurkova and Natasha Poly.

“Taking care of the planet is incredibly important to me, so I am delighted to be supporting HSH Prince Albert of Monaco and his foundation,” said Madonna. “The serenity and life of the oceans are under threat - we can make a difference now and should do everything possible to preserve it. The Monte Carlo Gala in September couldn't be more needed to raise the money to help save our oceans."

As well as a cocktails reception and sit-down dinner, the evening will include an auction led by Simon de Pury, from which all proceeds will be donated to support the Foundation’s priority marine objectives – plastic pollution, acidification, protecting coral, creating marine reserves, saving endangered species and researching new environmental technologies. There will also be live performances by special guests as well as an after party hosted by Richie Akiva and 10AK.

“The ocean is our lifeblood,” said HSH Prince Albert of Monaco. “Our living standards, our economy and even our health depends on it. However, pressures from climate change and marine pollution are putting our ocean under severe stress. I believe that there is hope, if we work hand-in-hand. Fundraising opportunities like the Monte Carlo Gala for the Global Ocean are thus critical to pursue this long-term action for ocean conservation.”

The Monte Carlo Gala for the Global Ocean will take place on September 26, 2018 at the Opera Garnier. For more information visit montecarlogala.org.

Book it now: Concours of Elegance at Hampton Court Palace