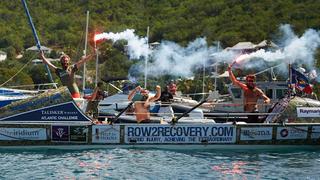 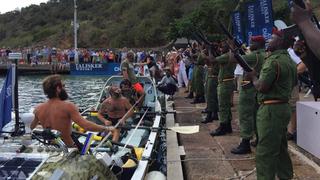 A team of four British men have set a new world record by becoming the first all-amputee team to row across the Atlantic.

The challenge is in fact a race which saw the men compete against 28 other able-bodied teams to be the first to row from La Gomera in the Canary Islands to English Harbour in Antigua. The team completed the 3,000 mile journey in 46 days coming eighth overall.

“We are so proud to be the first all amputee team to row an ocean and extremely humbled by the support we have received,” said skipper Cayle Royce. “We are very proud to be able to support injured servicemen and women everywhere. Although totally exhausted we are ready to celebrate the fact we have just conquered 3,000 miles in the world’s toughest ocean rowing race. There is life beyond injury — that’s our message, we hope it’s out there!”

The men undertook the challenge in aid of a number of charities including Help for Heroes, BLESMA and Row2Recovery which promotes adaptive rowing for wounded servicemen. Money will also be donated to the Endeavour Fund — the charity founded by one of our favourite royals at sea Prince Harry — who called the team with a message of congratulations on their arrival in Antigua.

The men have so far raised more than £26,000 for these worthy causes. If you would like to show your support for their achievement you can still donate by visiting row2recovery.com.

However, the men are far from the first to complete an impressive nautical challenge for a good cause. Just last month Coxless Crew became the first all-female team to row the Pacific in aid of numerous charities and a team of British sailors set out to cycle and row from London to Rio as part of the Row2Rio world record bid to raise money for the Macmillan cancer charity.