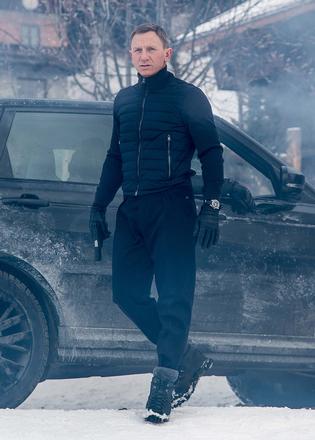 To celebrate the release of Spectre on DVD this February, London auction house Christie’s has announced it will be holding an auction of James Bond memorabilia, including a number of items featured in 2015’s blockbuster film.

The invite-only auction will feature 24 lots – Spectre is the 24th James Bond film – with all proceeds to be donated to Medecins Sans Frontieres, the United Nations Mine Action Service and other charitable organisations.

Among the top lots (and certainly one that will be of interest to superyacht owners) is the Omega Seamaster 300 watch worn by Daniel Craig in Spectre. Widely regarded as one of the best James Bond watches, the timepiece was created for the film and the first Bond special edition to be made available to the public – Daniel Craig even visited Omega in Switzerland to see the Seamaster 300 in production. The lot is expected to sell for £15,000-£20,000.

Another star lot that will appeal to speed demon charterers is the Aston Martin DB10 designed and engineered exclusively for Spectre. As fans may remember, the DB10 used in the film ends up at the bottom of a river, but luckily two extra models were created for show purposes and it is one of these that is up for grabs. The car also features a special plaque signed by Daniel Craig and is expected to reach up to £1.5 million.

For those more interested in Bond’s impeccable style there will be the option to bid for a pair of Tom Ford ‘Snowdon’ sunglasses worn by Craig during filming. A pair of ‘JB’ engraved cufflinks by the same designer (also worn during the film) are to be auctioned as a set with a Spectre Blu-Ray signed by Daniel Craig.

“As a life-long James Bond fan it gives me great pleasure for Christie’s to be part of this James Bond Spectre charity auction,” said David Linley, Honorary chairman of Christie’s EMERI. “All proceeds of the auction will benefit charitable organisations. We are proud to continue Cubby Broccoli’s philosophy of giving something back.”

The Spectre online-only auction will run from February _16-23 2016 at christies.com/spectreonline. The invite-only evening auction will take place on February __18 at Christie’s King Street, London._

5 of the best James Bond watches