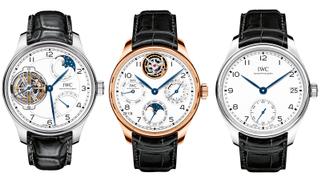 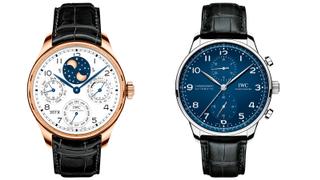 Many horophiles associate IWC mostly with flying, thanks to the fame of its Big Pilot’s and MK 11 aviation watches that date from the Second World War and inspired designs that remain strong sellers today. However, the IWC model that is often regarded as the brand’s signature piece actually has maritime roots.

Named the Portugieser, it first appeared in 1939. Two watch importers from Lisbon and Oporto, Rodriguez and Teixeira, approached IWC after receiving requests from sailors for a large wristwatch with the precision of a marine chronometer – in other words, a watch that was the exact opposite of the prevailing trend for small, neat timepieces with art deco styling.

IWC responded by fitting a highly accurate pocket watch movement into a plain, 41.5mm case with the option of simple black or silvered dials. The Portugieser was made in small numbers until 1958 (plus a very few for the German market in the 1970s) before being revived for the brand’s 125th anniversary in 1993. It therefore came as no surprise to discover that the series of 27 limited edition watches marking this year’s 150th “triple golden” jubilee all take inspiration from the imprinted dials and blued hands for which the Portugieser has become known.

The Portugieser line itself has been afforded anniversary star billing, with the launch of 150th versions of five models – the highlight being a “constant force” tourbillon that will be made in an edition of just 30 pieces in platinum (above, left). There is also a Portugieser perpetual calendar tourbillon in red gold that will be made in 50 examples (above, centre), a perpetual calendar version in red gold featuring a double moon phase display (below, left) that IWC claims will remain accurate for 577 years (250 examples) and a steel-cased chronograph that will be produced in an edition of 2,000 (below, right).

The fifth special Portugieser is the Hand Wound Eight Days Edition, which has a 43mm diameter case in red gold (250 examples) or steel (1,000, top, right), a “stop seconds” feature for accurate time setting and a sapphire crystal back that shows the mechanism in all its glory – complete with its built-in power reserve indicator and gold anniversary medallion. It’s the best and simplest of the lot, as well as being the version that’s most faithful to the 1939 original.

Were Rodriguez and Teixeira around to see it today, I imagine they would thoroughly approve – as would IWC’s many seafaring customers.