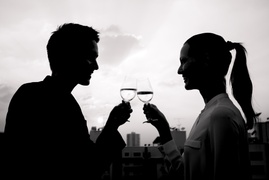 Summer is on its way and your superyacht is almost ready to receive you. It’s time to ponder which wines you are going to drink on board. As well as buying the best wine for your private jet, it’s something of a challenge stocking a sea-going cellar, although you will, of course, be drinking the best.

The best doesn’t necessarily mean the oldest. More than 85 per cent of wine bought in the UK is drunk within 24 hours of purchase, but an alarming amount is spoiled by being kept too long. The French drink their wines much younger than we British do, possibly because the myth was that our cellars were colder and thus the wines took longer to mature.

At a birthday dinner the other night, a friend opened a 1999 Meursault that he had been keeping for a special occasion. It was shot to pieces and oxidised. There was fruit there – just – hinting at past glories, but he should have opened it years ago.

Part of the problem with the fine-wine market is that folk aren’t drinking enough – merchants have warehouses full of wine.

I’ve just had a bottle of 2005 Ch. Calon-Ségur. It was far too young according to the vintage charts but absolutely spot on as far as I was concerned. A quick double-decant and it was ready to go: rich, ripe, earthy, robust and still crammed with vibrant, concentrated fruit and barely any sediment to speak of, useful on a superyacht when wines can get churned up in the bottle. I even broached a 2009 Ch. Montrose, quite striking in its brooding adolescent beauty.

Even a fine vintage port can be drunk young while it still boasts maximum expression of fruit and body, such as the exquisite 2009 Taylor’s I had the other day. Of course, if you keep it for 30 years you will get something magnificent in a different way. Keep it for 40 and it might collapse on you.

Open your bottles young and chart their progress over the years. After all, that’s why the good Lord put 12 bottles in a case.

Winonomics: How to spend £4.5 million

Champagne Taittinger has just bought 69 hectares of prime, English sparkling wine-producing land in Kent. Kingscote Estate in West Sussex is also up for sale, complete with six-hectare vineyard (producing 100,000 bottles a year) and 15th century barn, for £4.5m. For the same price, one could buy…