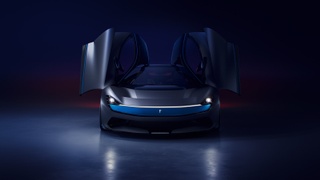 Power up: The first fully electric offering from Pininfarina

The atmosphere at the Geneva Motor Show in March was truly electric, with many marques showcasing the latest battery-powered or hybrid drivetrains that will be fitted to the next generation of cars. But it was a new manufacturer that truly stole the electric show with the car pictured above: the exotic-looking, fabulously fast, beautifully engineered and emission-free Battista from Automobili Pininfarina – a car penned on the very drawing boards where boats such as the Princess Yachts R35 and X95 were conceived.

Since the founding of the design house in 1930 by Battista “Pinin” Farina, the Pininfarina studios have created some of the most famous shapes in the history of the automobile, from the Alfa Romeo 6C Berlinetta of 1935 to modern classics such as Ferrari’s 599 GTB Fiorano, Scaglietti and California. But only now has the firm established itself as a maker of cars in its own right. And it appears to have hit the ground running with the Battista, which is due to arrive on our streets next year as “the world’s first electric, luxury hyper GT”.

Set to be the most powerful road car ever built by an Italian manufacturer, the Battista’s battery powertrain will be supplied by class- leading firm Rimac and is expected to produce 1,900hp to give the car a top speed of 350km/h and a zero-to-100km/h time of less than two seconds. An innovative, T-shaped battery pack promises to optimise weight distribution, while four independent motors will provide separate power to each wheel. This creates a “torque vectoring” system that, combined with huge carbon-ceramic brakes that regenerate the batteries and adjustable, electronic suspension, promises to make the Battista a truly thrilling driver’s car.

where we're going, we don't need roads: automotive innovations about to take off

Charging into battle: The rise and rise of the luxury electric car