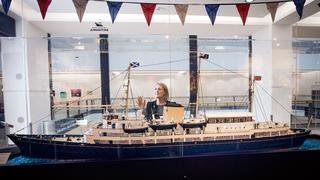 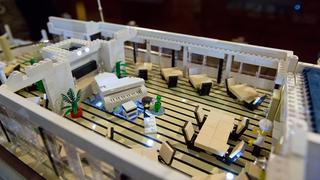 It’s no secret that royalty love a yachting vacation and, when it comes to our favourite royals at sea, perhaps no-one is more prolific than Queen Elizabeth II and the British royal family.

Despite being retired in 1997, HMY Britannia is one of the best-known royal yachts of the modern era, drawing over 300,000 visitors to her final home at Ocean Terminal in Edinburgh, Scotland each year.

This year Ocean Terminal is celebrating the Queen’s 90th birthday by teaming up with Lego to create a 1:37 scale model of the yacht using the brand’s iconic bricks. Designed and constructed using the original plans and drawings for Britannia, the model took Lego builder and fisherman Jim McDonough eight weeks and 40,000 bricks to create.

The model measures in at just over 11 feet and boasts extraordinary attention to detail. From the Rolls-Royce Phantom V in the yacht’s garage to the white Baby Grand Piano in the tea room and the dozens of crew decked out in traditional naval uniform, nothing has been left out.

“We are thrilled with our Lego Britannia,” said Bob Downie, Britannia’s chief executive. “Jim has produced an outstanding replica model of the ship which will be on display during the Queen’s 90th birthday and this unique piece is sure to be a highlight for Lego fans, young and old.”

“It was an honour to be asked to build the Royal Yacht Britannia,” added Jim McDonough. “It’s one of the most exciting projects I’ve ever undertaken and being able to refer to the original plans allowed me to produce this replica of Her Majesty’s yacht.”

The Lego model of HMY Britannia is on display now at Ocean Terminal, Edinburgh. Visit royalyachtbritannia.co.uk for more information.