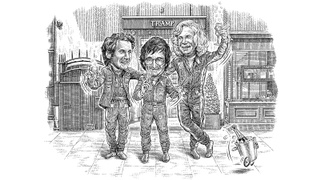 Eddie Jordan remembers a dear friend with whom even haggling over the price of a yacht was a pleasure, and another, a former F1 legend, with a little-known talent...

Let me start by paying tribute to Robert Braithwaite, the former Sunseeker boss and the man who made that company what it is today, who sadly passed away in March. Robert started from very humble beginnings, repairing outboards on the south coast of the UK, and eventually became the biggest employer in Poole with Sunseeker. What he achieved in the sales, style and reputation of his boats is staggering.

I was fortunate enough to get close to Robert after buying a series of Sunseekers over the years – I’ve always loved them. We had our ups and downs when negotiating the price of boats but I’m pleased to say nothing ever got in the way of our becoming enormously good friends. I am hugely privileged that Robert came into my life; he was a true and absolute gentleman and was honest and correct in all his dealings. The guy will be sorely missed, and not just by the boating fraternity. My heart goes out to all the people working for Sunseeker because they’ve lost a great friend. The most important things in his life were his staff and his family. He was just an incredible guy and I can’t speak highly enough of him. I’d like to dedicate this column to him.

I was back in London recently because Eddie & the Robbers were invited to play at the 50th anniversary of the Tramp club in London. This place is legendary and came before all those other famous clubs such as Annabel’s or Studio 54 in New York. Everyone went there – The Beatles, the Stones, Queen, The Who – even Eddie Jordan!

When we played there the place was absolutely rammed and it reminded me of the good old days when I would be there with James Hunt and Niki Lauda. James was the iconic playboy and his girlfriends were renowned. People always ask me about him: what was he like? Was he as cool as they say? But let me tell you, the guy who seemed to have the magic formula when it came to the girls was Niki. His Austrian way seemed to get him into all sorts of places – including two F1 world championships. James’s brother David ended up driving for me for a while, and I enjoyed many rounds of golf with James before he died. Great memories.

It turns out I had to miss the St Barths Bucket, but for good reason: it clashed with my son Zak’s wedding in Cape Town. But I’ll be back on the boat soon. I’m going to spend a lot of time on board in the Mediterranean this season. I’m doing less television work, which has always interrupted my cruising, and I’m so looking forward to having a clearer diary.

I’m especially looking forward to visiting Turkey. Most people don’t appreciate how many days it takes to sail there, but when you’ve got places such as Bodrum and Marmaris waiting for you, it makes it all worthwhile. Then you’ve got Greek islands such as Kos, which I love. It’s an amazing place to be early or late in the season because the water is warm and crystal clear and there are lots of little bays where you can go in stern-to with a rope around a tree or rock.

Of course, I’ll do the usual destinations such as Sardinia, Corsica, the west coast of Italy and also the Porquerolles in France. I do love the Med... the food, the wine, the atmosphere. It’s very special. We’re also planning on taking Blush up to the Norwegian fjords and then to Ireland to help ring in the 300th anniversary of Cork Yacht Club in 2020, which will be a very special moment.

Right, I’m off to raise a glass to Robert Braithwaite. I hope you’ll all join me.