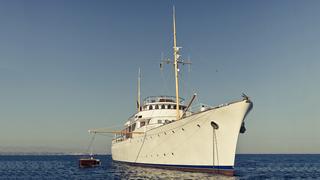 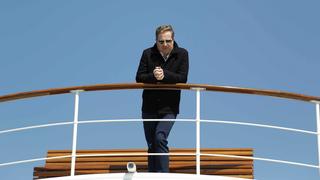 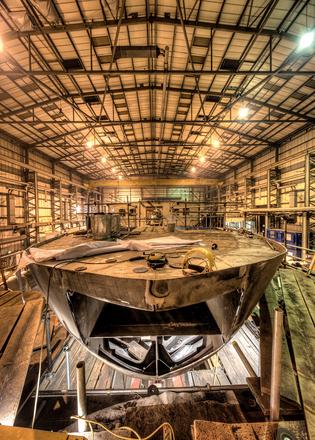 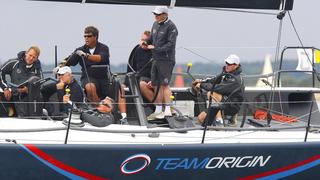 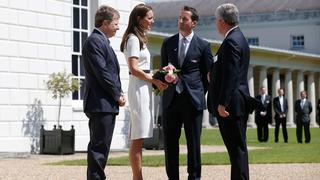 On board with Sir Charles Dunstone, owner of classic yacht Shemara

Being unconventional and a skilled negotiator brought superyacht owner Sir Charles Dunstone great success but, as he tells Stewart Campbell and Sacha Bonsor, his rebuild of _ Shemara _tested those skills to the limit.

There’s an enormous picture of Shemara, mid-rebuild, hanging on the wall of Sir Charles Dunstone’s sixth-floor London office. He sits facing it, so has a gratifying “that’s mine” moment every time he looks up from his desk. That and another photo of the Mandarin Oriental in New York are the only embellishments in a very unassuming space. No penthouse suite for this billionaire mega-boss: just floor-to-ceiling glass walls (not even frosted) looking out onto a big sales floor. The chairman of Carphone Warehouse and TalkTalk Group seems surprised when I say it’s probably the smallest office of any superyacht-owning CEO out there, but then this knight of the British realm likes to buck convention, something he drills into his thousands of employees. “One of the rules in TalkTalk is when the world zigs, we zag,” he says.

Dunstone didn’t follow the herd in his choice of boat, either. “I like doing the unconventional,” he says in reference to the massive undertaking that was the rebuilding of Shemara, the 1938 Vosper Thornycroft classic he found lying in Lowestoft. “It’s a much more interesting project [than a new build]. And in a way it’s actually easier to conceive of restoring something beautiful than to try to build something beautiful from scratch.”

It was love at first sight. He first spied Shemara in the pages of _Boat International _back in the mid-2000s, and on a drive up to Norfolk decided to divert to the east coast town of Lowestoft, where she had been resting for decades, to see if he could find her. “I just sort of drove around and suddenly there she was, sitting in the middle of this disused dockyard,” he says.

Once a notorious party platform belonging to Lord and Lady Docker, she was bought by reclusive property magnate Harry Hyams in the late 1960s and taken to Lowestoft, and that’s where she stayed, buffed and polished by a permanent staff of seven, but otherwise static: a relic, a floating time capsule. Or “like a 1960s bed and breakfast”, Dunstone jokes, describing her interior, which had remained pretty much unchanged in half a century, curtains and all.

“If I’ve got an idea to do something, I just can’t not do it,” he says. “That’s my personality. So I see Shemara and I think how amazing it could be. My mind has a very bad habit of just disregarding everything that’s going to be awful and thinking, ‘Come on, we can do this, we’ll find a way, it’ll be OK.’ In a funny way, the bigger the project is, the more enthusiastic I am.” Tenacious, too, since it was far from a case of just writing a cheque and sailing away in his new boat. Hyams proved a canny, frustrating and sometimes elusive negotiator and it was years before Dunstone was handed the keys.

“I managed to find him and wrote him a letter. Then we agreed to meet and there began a very slow process. He’s always very reluctant to sell anything. I think he still owns every car he’s ever bought. People had approached him to buy the boat before and he always refused. But he and I got on quite well and we talked about how much I loved boats and what an amazing boat she was. One of the first times we met was for lunch on board. She was sitting in, literally, a derelict dockyard. The yard went bankrupt years before and it was just this desolate place, and there’s Harry and I having lunch on the aft deck,” Dunstone remembers.

Not many superyacht sales negotiations last four years, but Hyams eventually relented in September 2010, accepting Dunstone’s offer. A month later, the yacht moved for the first time in more than 30 years, as she was towed out of the dock and around to a shed in Portsmouth, leased to a company Dunstone set up exclusively to rebuild the yacht: Shemara Refit LLP. “Lots of people came out to see her go – there was quite a crowd,” Dunstone recalls. Was Hyams sad to see her go? “Yes, I think he was. He loved that boat.”

Shemara isn’t Dunstone’s first boat – but it is his first one without a mast. He learnt to sail – his first love – during family holidays in Norfolk, in the maze of tide-filled channels off the town of Burnham Market – “the same place as Nelson learnt to sail”, he says with a smile. “I loved messing about on boats.” His first good-sized purchase was a 14 metre Beneteau he bought with a colleague when the business he founded in 1989, Carphone Warehouse, really started to take off. “We did terrible things to that boat. It was amazingly forgiving,” he says. He was just 30, running a business that was surfing the crest of a mobile telecommunications wave.

“It was amazing, seat of the pants, crazy,” he remembers. “The mobile phone market was exploding faster than anyone could have imagined. I have an Australian friend who always tells me I’m the luckiest guy since Ringo – you know, for stumbling into mobile phones just at the moment that the market took off. It’s been the most amazing business. Growth is the most forgiving thing in the world. You can make all sorts of mistakes if you’re in a market that’s growing, because the momentum forgives. If you meet people that have been successful in business, they all say that it required a good degree of luck – you need to be in the right place at the right time. And then you need to seize the moment.”

A sharp business brain helps, too, obviously, and Dunstone turned his fully to the rebuild of Shemara, in the creation of his very own yard, instead of handing the project to an established company. “We rented the shed ourselves, we hired the naval architects and then tendered each job,” he says. “You don’t know what you’re going to find with a project like Shemara. It’s like a house, isn’t it? No builder can give you a quote on an old house until they get on the roof and see what’s going on. So there’s no way anyone could give a quote for this boat. And once your boat is in pieces in their yard, you’re just going to be completely held to ransom. So we rented this shed and started subcontracting.

“The moment I knew we were on the right track was when we started stripping it. As they were cutting all these bits out, they found asbestos. We asked specialist maritime people if they could remove it and they said of course, but for £84,000 or something. Morty (Peter Morton, owner of Shemara Refit LLP), who ran the project, said: ‘I don’t think this asbestos knows whether it’s on a boat or in a factory or in an office building.’ So he just got the Yellow Pages (business directory) and rang demolition people from Portsmouth and they came and did it for seven grand. At that point you realise that anything that’s got the word maritime next to it is just the most terrible rip-off.”

With so many disparate contractors and designers, Dunstone’s management skills were called into practice throughout. He asked Ilse Crawford (“a genius”, says Dunstone) to style the interior and Mark Tucker, of Design Unlimited, to craft the layout and exterior. Shemara was Crawford’s first boat project, which caused a few moments of heightened tension. “There were some fearsome arguments! Ilse would say, ‘we’re going to do this’, and others would go, ‘no, you can’t do that because you’ve got to have a fire door here, and watertight door there’, and this and that.” Dealing with this was second nature to Dunstone: “That’s what I do, you know? Trying to get to where you want to get to, with lots of people explaining why that’s difficult and finding your way through it. Yeah, that’s normal.”

Shemara popped out the other side of this process in summer 2014 and headed straight for the Med, sparkling, pristine and complete. The snagging list was only a few items long, according to her owner, and most importantly she’s serving her purpose as a true family yacht for his wife and two (with another on the way) children. Tiring of getting drenched on various stripped-out race boats in the frigid Solent, Celia, who he married in 2009, made a declaration: she would never get on another boat without cushions. Fortunately, Shemara’s not short of those, and the kids “absolutely love her”, says Dunstone. “There’s such a warm, special feeling on board.”

He can’t quite quit the race boats, though – and is one of the key backers of Ben Ainslie Racing, Britain’s biggest and best attempt yet to capture sailing’s most glittering prize, the America’s Cup. “When Ben was in San Francisco (competing for Team Oracle USA in the 34th America’s Cup) and was having that amazing comeback, I was texting him and Keith (entrepreneur and administrator Sir Keith Mills) and said: ‘You know, if we’re ever going to do this, we need to do it now,’” he recalls. History is not on his side: Britain has famously never won the America’s Cup. The form says stay away, but that would be terribly conventional, wouldn’t it?