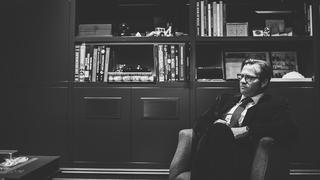 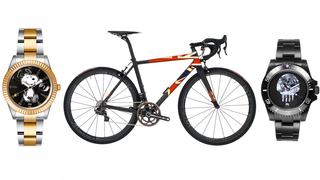 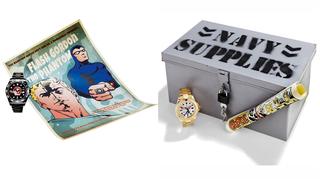 _If you want a watch with a difference, a true one-off, then George Bamford, founder of the famed Bamford Watch Department is your man, say Simon de Burton. _

It is not unusual for superyacht crews to enjoy a few perks, but these are usually confined to chic-looking superyacht crew uniforms, extra generous tips, top-notch food and, of course, the obvious benefits of sun, sea and exotic climes. But there are a few crew out there – ranging from captains to deck hands – whose magnanimous employers have recognised their hard work with the gift of a bespoke luxury watch from the quiet king of horological customisation, George Bamford.

Who these crew are and the names of the yachts on which they serve, Bamford will not reveal (his business hinges on discretion) but he tells me that there is one particular boat on which every crewmember working on deck sports a Rolex Deepsea Challenge, personalised in the ship’s colours, while those operating below wear similarly adapted Rolex Datejusts.

For those who have never heard of Bamford, he is the younger son of JCB construction-equipment king Sir Anthony Bamford, who, rather than resting on the comfortable laurels of his father’s estimated near-£3 billion fortune, has struck out on his own and forged a successful business out of his long fascination with watches.

Bamford, 35, established the Bamford Watch Department (BWD) 12 years ago having spotted a potential niche for watches with dial names that his target customers would recognise, but with looks they probably wouldn't. To that end, he began buying new Rolex models and blackening them with a high-tech coating to create a unique appearance that even Rolex doesn't offer.

Wealthy people like to have something no one else has - and the ability of BWD to provide just that has led to a steady expansion of its customer base as well as the number of makes to receive the Bamford treatment, which now includes the likes of Audemars Piguet, Panerai, Patek Philippe and Cartier.

The exact formula used to create the military grade titanium (MGT) coating used on Bamford watches is as much a secret as the names of the customers who buy the finished articles, but Bamford's bespoking doesn't stop at blackened cases. Dials, hands, numerals and bracelets can all be altered at a client's behest, with one individual spending almost £200,000 to have a Patek Philippe extensively customised to his exact requirements.

Bamford says he came up with the idea of creating such one-offs after discovering that the Rolex Cosmograph Daytona given to him as an 18th birthday present by his parents wasn't quite as exclusive as he had at first imagined. “The first time I wore it to a dinner party I noticed that most of the other blokes around the table had exactly the same watch. I was completely crestfallen, simply because I had previously thought I was wearing something quite special, only to discover it wasn't rare in the least.”

The BWD brand has a worldwide following that has resulted in interesting collaborations, including with the Paris store Colette, fashion house Mastermind Japan and publisher Hearst. The latter worked with Bamford and US design guru Darren Romanelli to produce a series of 25 Popeye-themed Rolex watches, with hands in the form of the cartoon sailor's muscular arms. BWD has also created limited editions with the artist Marc Quinn and in September will be launching a new, cartoon-inspired watch that Bamford promises will be “something quite special”.

Indeed, “specialness” is what BWD is clearly all about, something you discover as soon as you arrive (strictly by appointment) at the towering Mayfair town-house that serves as the company HQ and which is known to insiders as “the Hive” owing to the prevailing buzz of creativity. Everything, from the first sketch of a new watch to the dispatch of the finished piece, is carried out here. There are dedicated rooms for the two full-time watchmakers, another for engraving and polishing, a studio for the three-strong design team and, importantly, two client rooms.

It is within these tranquil, thoughtfully furnished areas that potential customers discuss their specific horological needs. Typically, a consultation lasts two hours, during which the client can (with the help of Bamford's expert guidance) use a large-screen electronic watch configurator to put together his or her dream timepiece.

Prices start at £8,500 for a blackened Rolex Explorer rising to “the sky’s the limit”, but while the watches used for the conversions are brand new, the customisation process voids the manufacturers’ warranties, so BWD backs the products with its own two-year guarantee.

And, while making extra-special watches for the rich who want to be different remains the crux of Bamford’s business, he has recently expanded his remit with the opening of the Bamford Cycle Department. “That project has been going for almost a year and we’ve had a great response,” says Bamford. “The bikes are made to fit the rider exactly and can be equipped with any particular components and finished to any design. We recently built a batch to match a client’s yacht.”

Even more recent, however, is the Bamford Grooming Department, which launched in June to provide a range of sweet-smelling products for the metrosexual man. “That goes back to my childhood,” says Bamford. “I remember my father spraying me with his cologne and thinking it made me just like him. We’ve created our own version of the smell based on agarwood and have used it for a range of grooming products and a scented candle.”

And, coming from Bamford, it won’t be a surprise to learn that agar is said to be among the rarest and most expensive wood in the world. So next time you climb aboard a superyacht, it might be worth checking out both the quality of the crew’s wrist wear – and the way they smell.

5 of the best vintage sailing watches to buy now