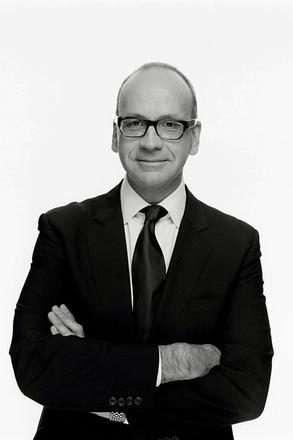 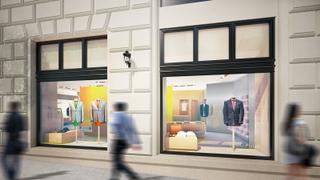 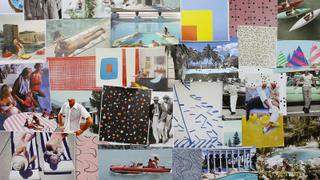 Richard James opened a store on London’s Savile Row in 1992, shaking up the old tailoring houses on that famous road with his unpretentious air and democratic approach to business. He ushered in a new, more modern era for the Row, with his slimmer-cut suits, bold colours and witty takes on traditional styles.

Now, 25 years on, he is opening his first New York store, on Park Avenue and 57th Street. The new 1,800 square foot space marks his first major project after the recent investment by Charles Cohen, the American real estate and film entrepreneur. As well as ready-to-wear, there will be an area for bespoke services, and London tailors will fly to New York at least five times a year to cater to clients. Although bespoke is “a small but largely significant part of the business,” James insists that “it gives us direction and focus.”

James can already boast a roster that includes some of the best dressed men in the world, including George Clooney, John Legend, Robert Downey Jr, Benedict Cumberbatch and Mark Ronson. Yacht designer Andrew Winch, a customer and friend, says that his Richard James suit is his favourite piece of design.

After studying photography at Brighton College of Art in the UK, James became a buyer at Browns, the London boutique. There, he learned “a lot about what men want from clothing.” He then launched a “small store” on Savile Row. “When we started,” James admits, “we were hated” and called “parasites that can’t tell one end of a needle from the other.” Adding historical perspective, James says that although Savile Row was intensely conservative when he arrived, it had been a “very fashionable and innovative street,” from the time of Beau Brummell at the start of the 19th century, to Tommy Nutter in the 1960s. “Once you have learned the rules of bespoke tailoring, then you can set about breaking them,” says James. “Other tailors on Savile Row learned the rules a long time ago, but they still haven’t learned how to break them. I think that’s what gives us our edge.”

Winner of both the British Fashion Council’s Menswear Designer of the Year and Bespoke Designer of the Year awards, James’s overall design philosophy has remained consistent. He aspires to produce classic clothing, but to push the barriers by experimenting with fabrics and making bold use of pattern and, particularly, colour. His signature style is for one or two button, single breasted suits with slightly longer waisted jackets, with deep side vents and higher armholes for a slimmer silhouette. It is a formula that is now widely referred to as the “modern classic” cut.

James tells me that the bespoke process “starts the moment you first walk through the door, when we first notice your posture and how you hold yourself. There is then an open discussion with a cutter, who will draft your personal pattern. We listen to what you want – customers are at the centre of the design process – but then we let you know what we think will work best for you as regards style, cut and cloth.”

A bespoke suit takes between eight and 12 weeks to make and requires at least two fittings and approximately 70 hours of work. It is the details that interest him particularly, he says, “because that is what can really elevate a suit and make it special.” It is also crucial to use “the best fabrics, sourced from the world’s best mills in England and Italy.”

Colour has always been at the core of the Richard James philosophy. “It’s a means of setting yourself apart and revealing something of your inner self. English men are quietly peacock-like.” When asked about the enormous numbers of coloured socks they sell in the UK and if that quintessentially English sartorial style will take hold in the US, his reply is definitive. “People say you can tell a lot about a man from his shoes, but you can actually tell more about him from his socks!”

James’s most recent show in London showed the spring/summer 2018 collection, which was inspired by American 1950s optimism and Ellsworth Kelly paintings. The collection buzzed with life and ice cream sundae colours, with lots of textures and abstract prints inspired by rocket ships and machinery. Giving men the confidence to dress individually has been one of James’s most enduring influences. He notes that not long ago many style conscious men had given up on English tailoring and were looking to designer labels like Comme des Garçons and Giorgio Armani. “We made British menswear sexy again.”

Although the global trend is for more relaxed dressing, James firmly believes that men aren’t ever going to stop wearing suits completely. “It is simply a brilliant, timeless piece of design, on both a stylish and practical level. And absolutely nothing gives a man confidence and presence like a well-cut suit.”

After his New York debut, James plans to expand throughout the US and his eyes are now firmly set on the West Coast.