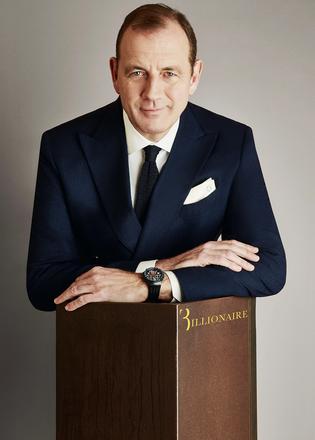 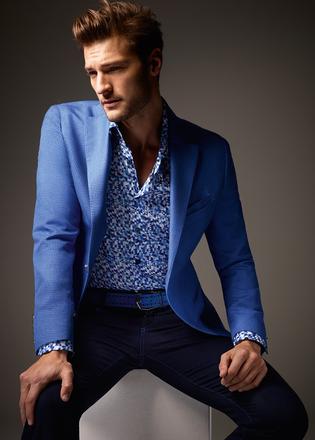 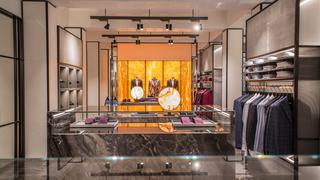 It might sound like a fashion oxymoron to have an erudite, quiet German designing for an intentionally flamboyant Italian brand, but that is exactly what’s happened at Billionaire Couture and it’s a marriage made in heaven. Last February, Michael Ködel became Billionaire Couture’s creative director after a successful career at Ermenegildo Zegna’s couture division.

Billionaire Couture, established in 2005, is the brainchild of the colourful entrepreneur Flavio Briatore, whose name is best known for his association with the high-octane world of Formula One. Briatore’s desire to have a distinctive wardrobe suited to his lifestyle has given rise to what is perhaps the most unashamedly aspirational label in the world. The name is purposefully provocative and meant to exude the pinnacle of luxury and glamour.

Trying to get to the root of what Billionaire Couture is all about requires a trip to the Milanese headquarters and a drink with Ködel, himself. Once he starts explaining the Billionaire Couture ethos as he sees it, it’s obvious there is a rigorous amount of R&D and sheer quality behind the bling. In many ways, it brings to mind the comparable duality at the heart of F1 – the up-front, flashy glamour of the paddock circus along with the science that goes into developing the machines on which this is built.

Take the jeans in the collection. There are more than 45 designs per season, many featuring elaborate embroidery, including some with the ornate Billionaire Couture house crest. Ködel explains that the gold thread used has been developed so as not to set off the scanners at airport security, because that would inconvenience his frequent- and high-flying customers.

Ködel is full of such insights into the requirements of the men he is designing for. How they want to look unique and feel special; how the product has to be made in a way that’s highly functional for the client – “perhaps there isn’t just one pocket inside because they might have more than one mobile”; how they want to travel with less weight – Briatore apparently says that “luxury is to be comfortable in what you wear”. He’s keen to stress that although the style is casual it is still impeccable.

This knowledge, it transpires, comes from old-fashioned customer feedback. Briatore and his friends provide the first level of response. Ködel and his team “speak to the customers on the phone, like in the old days”. Billionaire Couture deals in such small quantities that the emphasis is on individuality for a specific clientele, not global-brand world domination.

“I really worked on invisible details,” says Ködel. “The true luxury is that you can put in loads of details other brands can’t. We can afford to do all the production in Italy, with beautiful craftsmanship. I want to see the customers come back happy because they recognise a unique feeling.”

At Billionaire Couture you don’t find ordinary pieces. Everything says “I’m different”, in a swashbuckling, gutsy, hedonistic way. The wardrobe is awash with patterns, distinctive materials, embroidery, colours – a house speciality is what Ködel calls a “twinset”: a jacket and shirt in a matching pattern. And there are seasonal motifs. It’s a falcon for this spring/summer’s collection. “It’s a powerful animal that fits with our customer because they’re also hunters, hunting for power, for lifestyle,” explains Ködel.

There is a humour here, although, not of the self-effacing, eccentric kind, it is more of a playboy type – an attitude born of confidence and of being able to live life at a different pitch to others. One part of the spring/summer 2016 collection was inspired by F1 racing teams, a play on 1960s team-coloured blousons. “Instead of the stripes I took very fine leather applications and then put our crest in them,” explains Ködel. “Our customers like sports cars, so I wanted to give them a well-dressed look for using their cabriolets on the weekend. Our customers have a lot of free time, because only they decide when and how they work.”

Luxury gymwear is a popular part of the collection: “the gym is a place where a lot of deals are done.” Riviera style was also another inspiration, “I took some of the ideas from the 70s – when people loved to go out, disco dancing, the international jet set.” The man who Ködel had in mind? The late shipping tycoon Aristotle Onassis.

“I studied how Onassis dressed. I went to Naples and met some old tailors who made his clothes. They told me how they had cut his clothes; the shoulders were different… He was not a tall man, but always dressed importantly. I decided I wanted to do a new interpretation of this style.” It seems what Ködel loves is how Onassis would be the best-dressed man in the room, but also the most relaxed-looking. “Look how he is finely dressed but the only one who sits casually,” he says, showing me a photograph. “I wanted this comfort, so I made a lot of things in jersey – a blazer with a shoulder that has no construction inside,” he enthuses. “And this is to become one of the brand’s iconic pieces.”

This piece encapsulates the brand’s identity. The Billionaire Couture customer can wear whatever he wants, wherever he wants. He doesn’t have to dress up for work or to look conventional. He is unconventional. All he asks of his wardrobe is that it feels comfortable. And looks different.

Jewellery designer Monica Vinader on how the ocean inspires her